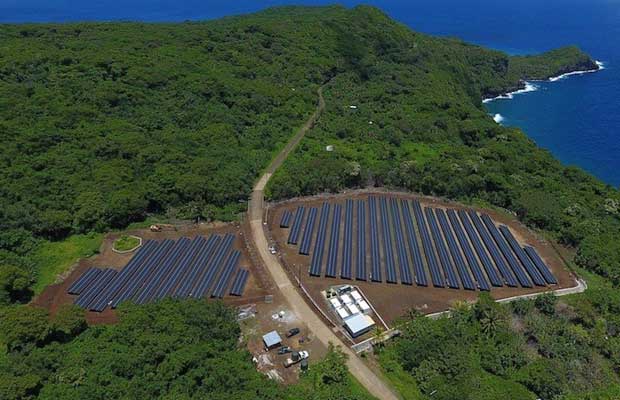 Tesla has revealed that with SolarCity it is powering nearly the entire island of Ta’u in American Samoa with solar power. Tesla officially acquired SolarCity on Monday.

SolarCity in a blog notes that Ta’u now hosts a solar power and battery storage-enabled microgrid that can supply nearly 100 percent of the island’s power needs from renewable energy, providing a cost-saving alternative to diesel, removing the hazards of power intermittency and making outages a thing of the past.

The microgrid of 1.4 megawatts of solar generation capacity from SolarCity and 6 megawatt hours of battery storage from 60 Tesla Powerpacks – was implemented within just one year.

5,328 panels installed can run the entire island on green energy for three days and 6MW of storage can recharge in 7 hours of sunlight.

The project was funded by the American Samoa Economic Development Authority, the Environmental Protection Agency, and the Department of Interior. The company notes that the new system is expected to offset the use of more than 109,500 gallons of diesel per year.

Ta’u , a 17-square-mile island is composed of roughly 600 residents and is located about 4,000 miles from the West Coast of the United States.

Before the official acquisition of SolarCity early this week, both the companies bagged a 20-year contract to develop and runs 52MW first-of-its-kind solar array and energy storage system on 50 acres for Hawaii’s Kaua’i Island Utility Cooperative (KIUC).