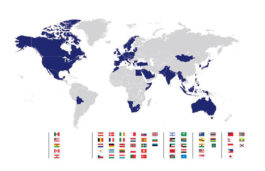 Solar Frontier has announced that total cumulative shipments of its CIS thin-film solar panels have surpassed 4GW and have increased shipment areas by 11 countries, reaching almost 60 countries around the world. Some of the 11 new countries that had approximately 1GW of modules shipped over the last year include Norway, Somalia, and Mongolia. The […]