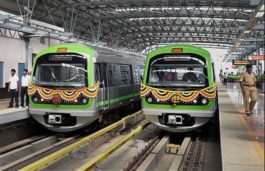 Bangalore Metro Rail Corporation Limited (BMRCL) has reportedly partnered with Cleanmax to install rooftop solar system at Baiyappanahalli and Peenya depots, under public-private partnership. N M Dhoke, Director (R.S.E), BMRCL speaking to DH said solar panels on the rooftop at Baiyappanahalli and Peenya depots will be installed in four months after awarding the contract and […]