Immediately following the US International Trade Commission’s finding of injury to American solar panel manufacturers in late September 2017, EnergySage saw the cost of residential solar spike on its Marketplace. Though prices have since restarted their decline, they are decreasing at a slower rate than before. 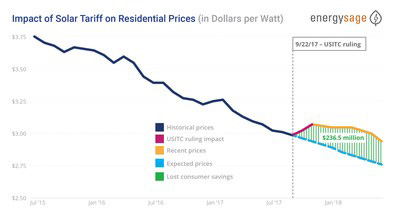 The result is that the cost of a solar installation is now 5.6 percent higher than it would have been if costs had been allowed to fall at their preexisting rate of decline.

For the average customer, this amounts to paying an additional USD 0.16 cents per watt more than they should have, or USD 960 for a standard 6-kilowatt solar panel system. When this price increase is applied across all residential solar purchases made nationwide after September 2017, the tariff effectively created a USD 236.5 million tax imposed on American consumers.

“These tariffs are yet another burden imposed on an industry that has long struggled with costs,” said Hugh Bromley, an analyst at Bloomberg NEF, an industry research firm leveraging EnergySage Marketplace data.

“The residential solar industry is fragmenting. EnergySage data allows us to monitor competition among the so-called ‘long tail’ of local and regional players who don’t publicly release their earnings in quarterly reports,” Bromley added.

“Yet despite these recent hurdles, the residential solar industry remains poised for tremendous growth over the next few years. All-time highs in consumer interest for solar-plus-storage, combined with falling prices and greater transparency, have mitigated the impact of these tariffs. As we show in this report, we have seen consistent increases in solar shopping levels on our Marketplace across the country,” Aggarwal added.