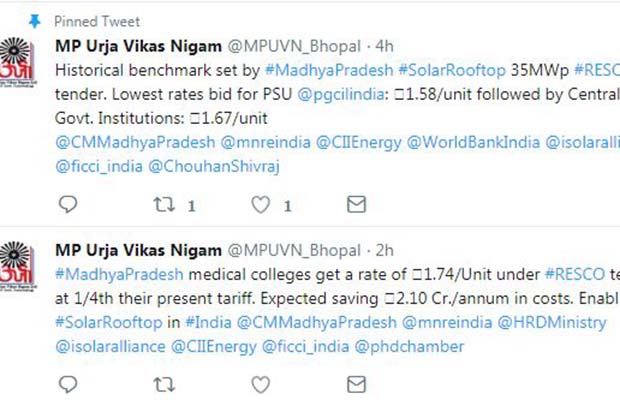 India witnessed a breakthrough in solar industry in the form of lowest-ever tariff rate of Rs. 1.58 per unit of power bid in Madhya Pradesh’s 35 MW solar rooftop auction, according to a tweet by the state-run Madhya Pradesh Urja Vikas Nigam (MPUVNL).

The tender has been rolled out in order to back the center government’s target of 100 GW of solar energy capacity by the year 2022 and also to make state government buildings more reliable on renewable energy sources.

The tender was auctioned in a phased manner with projects categorized on the basis of different government buildings such as schools, hospitals, medical colleges, central/state universities and police establishments.

Each category saw a different winning tariff rate ranging from Rs. 1.58-2.40 per unit in which private institutes and government colleges were bid at the highest rates.

The state government has also dealt with the safeguard duty hump that made rounds in the country’s solar industry. The bidders had been asked to submit the bids earlier than the prescribed date to presume no safeguard duty over the modules.

Eventually with the tender being successfully auctioned, the state government is set to fetch a considerable part of its power requirements from renewable energy sources.