Total Eren has announced the beginning of construction of two solar PV projects in Kazakhstan totalling a capacity of 128 MW. 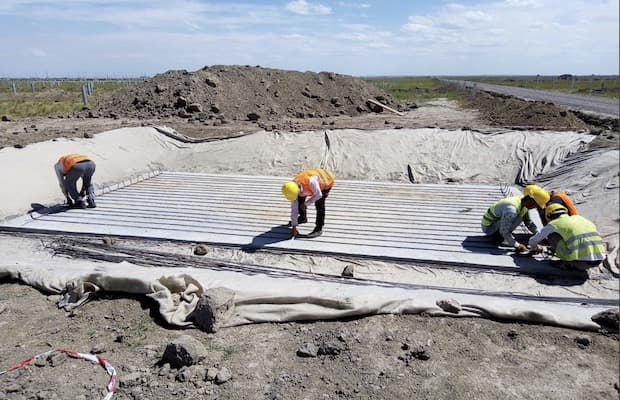 Total Eren, a leading renewable energy Independent Power Producer (IPP) based in Paris, has announced that it has begun the construction of two solar PV projects in Kazakhstan totalling a capacity of 128 MW. These are Total Eren’s first projects in Kazakhstan and in Central Asia more generally. The project costs reach approximately 59.7 billion KZT (157 million USD).

For each project, a 15-year Power Purchase Agreement (PPA) has been signed with the Financial Settlement Center for Renewable Energy Sources (FSC), in September 2016 for M-KAT and in February 2017 for Nomad. Entirely owned by the Kazakhstan Electricity Grid Operating Company (KEGOC), the national grid operator, the FSC was created in 2013 to purchase electricity produced from renewable sources.

Fabienne Demol, Executive Vice-President – Global Head of Business Development of Total Eren, said, “We are delighted to enter the Kazakh renewable energy market with the M-KAT and Nomad projects, which also mark our first steps in Central Asia. We are looking forward to the solar farms commissioning in order to deliver renewable energy for the benefit of the Kazakh people and contribute to the diversification of the Kazakh energy market.”

For both projects, Turnkey Engineering, Procurement & Construction (EPC) contracts have been signed with METKA EGN, a subsidiary of MYTILINEOS S.A. Nomad and M-KAT will be the first PV power plants using single-axis trackers in Kazakhstan.

Currently, under construction, the two projects should enter operation by the end of 2019. Once completed, Nomad and M-KAT are expected to generate 225 GWh per year together, enough to supply the needs of about 40,000 Kazakh people while reducing CO2 emissions by about 300,000 tons per year.

The two projects will also support regional sustainable growth and contribute to local employment, with up to 580 workers expected to be employed for the construction phase.

Pascal Breant, Country chair for Total in Kazakhstan said, “With those two solar projects, Total is strengthening its ties with Kazakhstan where it has been present for 25 years as a strategic partner in the energy sector.”

With these projects, the IPP enters the Kazakh market and Central Asia, a region where it sees high potential thanks to great natural resources and strong political support for renewable energy.