After nearly four decades of wind project development, wind power now plays a central role in energy portfolio planning in a growing number of countries. Now, it is no longer local citizens, but utilities, IPPs as well as commercial and industrial enterprises that drive wind farm development globally. In GWEC Market Intelligence’s most recent update to the global wind asset owners database, the trend of power generators playing an increasingly central role as key players in wind farm ownership continues.

By the end of 2019, the top 15 wind farm owner-operators held over one-third of the total 650 GW of onshore and offshore assets globally. The newly merged China Energy (formerly Guodian Group and Shenhua Group) is by far the largest asset owner, with more than double the capacity under their ownership compared to the second-place China Huaneng. The non-Chinese top asset owner are active globally – Iberdrola, EDPR, Enel Green Power, RWE, Acciona, EDF, NextEra and Berkshire Hathaway Energy. 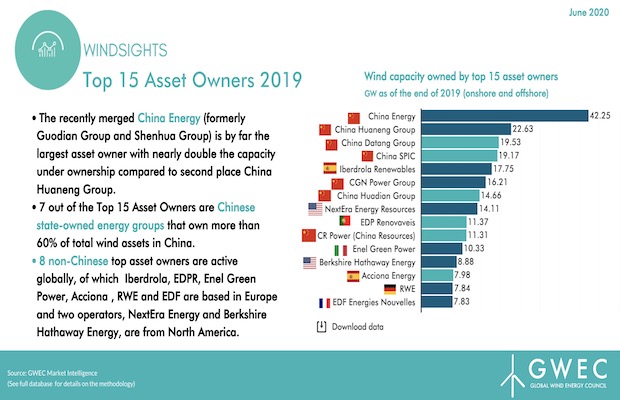 The report adds that with China being the largest wind market in recent years, it is no surprise that Chinese utilities continue to dominate the top 15 rankings of wind asset owners. Most of the assets held by the seven Chinese state-owned power generators by the end of 2019, however, are still located in the Asia Pacific. Altogether, these seven Chinese asset owners account for more than 60 percent of total wind assets in China and over 145 GW of capacity all together – this is over one-fifth of total global wind capacity. The remaining eight asset owners in the Top 15 are active globally, with six headquartered in Europe and two in the US.

Similar to the consolidation trends seen for wind OEMs, asset owners have also undertaken a rise in M&A activities to broaden their offering and capabilities as well as expand their wind power portfolio, which is increasingly being seen as a solid long-term investment for their shareholders. On the other hand, in the offshore sector there is a trend of two or more utilities joining forces to build and operate an offshore project to help manage the increasing size and complexity of offshore projects and reduce risk.

The analysis adds that overall, it is clear that utilities and asset owners see wind power as a promising and stable long-term investment to build their portfolios. More and more traditional energy companies are spinning off a renewables business to focus on these assets, and European utilities are looking for new opportunities to build their portfolios in emerging markets. As the energy transition moves forward, this means that new solutions of energy assets evolve and mature, giving asset owners and investors more diverse opportunities to generate revenues or to diversify risks in their wind power portfolio.