A list of five of the world’s largest offshore wind energy farms which are currently in operation, and a few upcoming projects that can disrupt these rankings. 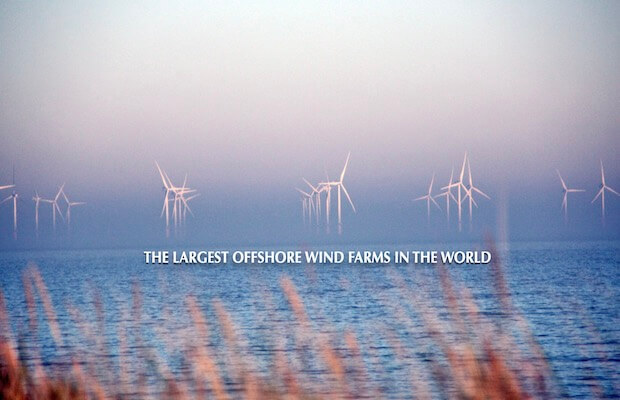 Offshore Wind Energy is a technology that just a decade ago was struggling to establish long term viability, even as Onshore wind energy was making giant strides.  There were  with fears over it being too expensive to grow at a large scale and compete with traditional market prices. Today it has well and truly marked its position as one of the leading sources of renewable energy generation in the rapidly transitioning energy sector. Offshore Wind Energy, through factors such as higher wind speeds, higher plant load factors, more stable power generation, almost limitless offshore space for turbine installations, as well as rapidly declining costs, is one of the most rapidly expanding energy technologies in the world.

A report by independent research agency GlobalData had highlighted that banking on all these advantages/ factors like limitless space for installation that don’t interfere with the livelihoods of people, and higher PLF, offshore wind is set to grow at a compound annual growth rate of 16.2 percent between 2019 and 2030, reaching a cumulative capacity of 142 gigawatts (GW) by 2030, compared to 23.2 GW at the end of 2018.

Here we take a look at five of the world’s largest offshore wind energy farms which are currently in operation, and a few upcoming projects that can disrupt the rankings.

The Hornsea 1 offshore wind farm, with an operating capacity of 1.218 GW is currently the worlds’ largest offshore wind farm, and nearly twice as large as the project that is in the second position. Part of an impressive array dotted over 407 km2 of North Sea more than 120 km from the Yorkshire coast, of the United Kingdom, the final turbine of the 174-strong array of turbines was successfully installed in October 2019.

The project which will hold the title for being the first offshore wind farm to be able to generate over 1 GW of electricity, will generate enough power to meet the energy needs of well over a million British households. Developed by offshore wind major Ørsted, the project features Siemens Gamesa’s 7 MW turbines.

Second in the list, ‘Walney Extension’ of England’s Walney Island is the second-largest offshore wind energy farm in the world with an operational capacity of 659 MW. Also developed by Ørsted, the project held the title of the world’s largest offshore wind farm for just over a year with operations beginning in February 2018, and official commissioning in September 2018.

The product features 87 turbines, with 47 MHI 8 MW turbines from Vestas and the other 40 turbines from Siemens Gamesa’s 7 MW platform. The project is a shared-ownership project between Ørsted and partners PFA (25 percent) and PKA (25 percent), and generates enough clean electricity to power 600,000 homes.

Third in the list is the London Array offshore wind farm with a nameplate capacity of 630 MW. Located 20 kms off the Kent coast in the United Kingdom, the farm was the largest offshore wind farm in the world for cover 5 years until the Walney Extension reached full production in September 2018. The plant is managed by London Array Limited, which is a consortium of three of the world-leading renewable energy companies in RWE (E.ON), Ørsted and Masdar – and global investor La Caisse de dépôt et placement du Québec (Caisse).

Commissioned in April 2013, the plant features 175 Siemens Gamesa turbines of 3.5 MW rating. A second phase of the project was planned to increase the capacity to 1000 MW, however, the second phase was scaled back and finally cancelled in February 2014 after concerns were raised about its effect on a local population of red-throated divers.

Next on the list, and the only project on this list that is outside of UK waters is the Gemini wind farm in the Dutch part of the North Sea, approximately 85 kms off the coast of Groningen. With a generational capacity of 600 MW, the project generates approximately 2.6T Wh of clean electricity, which powers approximately 785,000 households. Northland Power, Siemens, HCV and Van Oord own the farm, while Northland Power is the operator.

The plant features 150 of Siemens Gamesa’s 4 MW turbines which are equipped with a high-wind ride through (HWRT) technology, which enables the rotor blades to operate at high-wind speeds with minimal exposure to the wind. The project was officially commissioned in 2017 and supplies 85 percent of its power to Zeeland’s-based energy company Delta and the remainder of the 15 percent to HVC.

The final project on the list and one of the newest is the Beatrice offshore wind farm off the coast of Scotland. The project with a capacity of 588 MW was commissioned in July 2019, a couple of months before Hornsea 1. Managed by Beatrice Offshore Windfarm Ltd (BOWL), which is JV between SSE Renewables (40 percent), Copenhagen Infrastructure Partners (35 percent) and Red Rock Power Limited (25 percent), the project will generate enough electricity to deliver clean, renewable power to over 450,000 homes per year.

The project features 84 of Siemens Gamesa’s 7 MW offshore wind turbines and is expected to save around 8 million tonnes of harmful carbon emissions over its expected 25-year lifetime operation.

The East Anglia ONE offshore wind farm owned by ScottishPower Renewables and Macquarie’s Green Investment Group (GIG), is ready to knock the Beatrice offshore wind farm off the Top 5 list as it will acquire the second position at 714 MW of operational generation capacity ahead of the Walney Extension once it is officially commissioned.

The commissioning of the project isn’t far off now with all of the 102 turbines at the site successfully installed in April this year. The project like all the others in the top 5 also features Siemens Gamesa’s offshore wind turbines, with a 7 MW output rating. Once fully operational, it will produce 714 MW of clean energy annually – enough to power the equivalent of more than 630,000 homes. The project is located 43 km off the Suffolk coast of the UK, and the first of four offshore wind farms the Scottish Power Renewables is developing in the region.

One of, if not the biggest planned renewable energy projects in the world, the Dogger Bank offshore wind farm once completed will blow all figures and list of offshore wind projects out of the water with its planned 3.6 GW capacity, enough to power 4.5 million households. The project which is a collaboration between SSE and Equinor has already begun construction and is being developed as three projects of 1.2 GW capacity each. Each one of which is enough to match Hornsea 1 for generation capacity, making the project three times as large as the current biggest offshore project in the world.

The project is being developed using GE Renewable Energy’s Haliade – X turbines with an output rating of 12 MW, the highest rated capacity of any under construction offshore wind energy projects in the world.

However, Siemens Gamesa is ready to snatch that title back as well with its newly launched 14 MW platform conditionally selected for the 2.64 GW Dominion Energy Coastal Virginia Offshore Wind (CVOW) commercial project. The turbine variant has the capability to produce up to 15 MW with a 222-meter rotor.