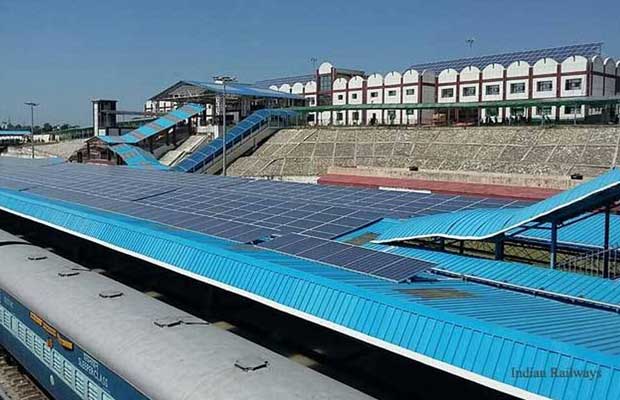 The famous Nampally station, which was built in 1907 by the last Nizam of Hyderabad  Osman Ali Khan, gets Rooftop Solar Power Plant.

The historic Hyderabad Deccan Railway Station, built in 1907 by Osman Ali Khan, the last Nizam of Hyderabad, has got a rooftop solar power plant, which will help meet some of its electricity requirements.

Popularly known as the Nampally station, it is among the first few Railway stations to go solar. The Indian Railways had in 2015 unveiled plans to tap solar energy in a big way, especially set up rooftop plants, both to promote clean energy and utilise the spaces to meet its own power needs.

IT major Persistent Technologies pitched in to donate solar power plants to the Railways. As part of this flagship initiative, it established a pilot project of 160 kW rooftop solar power plant at Pune railway station. The Hyderabad plant is of 222.5 kWp and is installed on platforms 5&6 using galvanium sheets. The plant will generate minimum of 3.15 lakh units of electricity per year. On a bright sunny day, the plant will generate 1,000 units of electricity.

The project has been funded by Persistent Foundation, the CSR arm of Persistent Systems Ltd. The entire system design, engineering, procurement and construction of solar plants at Pune and Hyderabad have been done by Sunshot Technologies.

According to the implementers, the plant will contribute about 16.4 per cent to the electricity consumption of the station. Persistent and Sunshot have used the best in class modules, inverters and other items such as cables, structures, etc. for maximum efficiency and power generation.

The Rs. 1.3-crore project is expected to save up to Rs. 25.6 lakh per annum without any upfront investment. It will also make the station greener by reducing 260 tonnes of carbon emissions annually. This equals smoke emitted from about 190 small cars in a year and planting about 43 thousand mango trees in 100 years. The solar power plant is also synchronized with the diesel generators along with DISCOM supply.

The entire system will be monitored online through Sunshot’s proprietary online monitoring system. Promoted by alumni of IIM Ahmedabad, the company works in Maharastra, Delhi, Tamil Nadu, Andhra Pradesh, Karnataka and Telangana and has so far helped in installation of 14,000 kWp capacity.