As for power, though it draws energy from the sun, the innovators also provided an option for it to be charged externally. 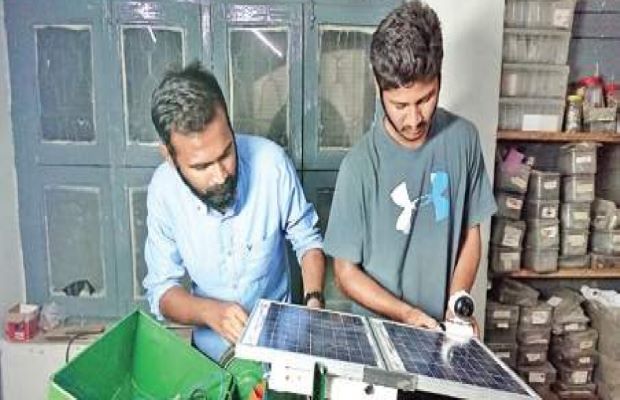 Students of Mahatma Gandhi Institute of Technology, Gandipet, M Charanlal and U Anil Kumar have invented a solar-powered grass-cutting machine which is being run through solar energy.

In a bid to ease the burden on sanitation workers, two engineering students have developed a utility machine, which cuts grass, sweeps, and mops – all in one. “It took around 3-4 months to make this” says Charanlal. Due to a continuous increase in the cost of fuel and the effect of emission of gases from the burnt fuel into the atmosphere, it was felt appropriate to tap the abundant solar energy available as a source of power to drive a grass cutter.

Called ‘Smart and Versatile Cleaner’, the machine, developed by the student innovators as part of their college project, is solar powered, can be controlled using a remote, and can be synced to a smartphone through an app. A 360-degree camera mounted on the machine helps in navigation.

“The machine cuts grass and collects it. Then, the rough tips are smoothened by a heavy roller. As for sweeping, it collects dust… and it can do both wet and dry mopping. It is versatile because it identifies the conditions in which it is deployed, and adapts,” Lal explained.

As for power, though it draws energy from the sun, the innovators also provided an option for it to be charged externally. “When both solar power and external power are unavailable, it can be used manually. The parts are detachable, and the sweeping and mopping components can be removed and used manually,” said Kumar. Besides this, the machine can charge mobile phones, and the 360-degree camera can be detached. Lal and Kumar hope their innovation would be patented by the government and put to large-scale use in both rural and urban areas. “In the future, our product can be customized, and we expect it to cost around Rs 10,000-15,000 per unit when there is large-scale production,” they said.