Tata Power Company Limited has reported Consolidated financial results for the period ended September 30, 2021. The firm, at the forefront of the transition to renewable energy from thermal power earlier, has been pushing aggressively to growth capacities, as well as integrate operations around renewable energy.

Renewables continued their strong contribution, bringing in Rs.1494 crores, as compared to Rs.1105 crores in the same quarter last year, a 35% growth.

On a Year on year basis, Tata Power  has grown over 20 percent as compared to Rs.8441.60 crores during the period ended September 30, 2020. Accordingly, profits have also grown over 50% as compared to the Rs.279 crores in the quarter ending September 2020.

The firm’s transmission and distribution segment (T&D) reported the highest growth, at 48% YOY to Rs 6787 crores.

In its analysis of the results, the firm has highlighted key wins including 1,000 MW of Utility scale EPC orders worth about Rs 3,000 crore, an LoA received for development of 580 MW of solar projects – 330 MW from RUMSL, MP and 250 MW from MAHAGENCO, Maharashtra.

The firm commissioned 256 MW of solar projects in the quarter, with another 1.7 GW in pipeline.

On Solar rooftops, the firm has indicated a strong quarter with its order book growing to 417 MW worth about Rs 1184 crores. 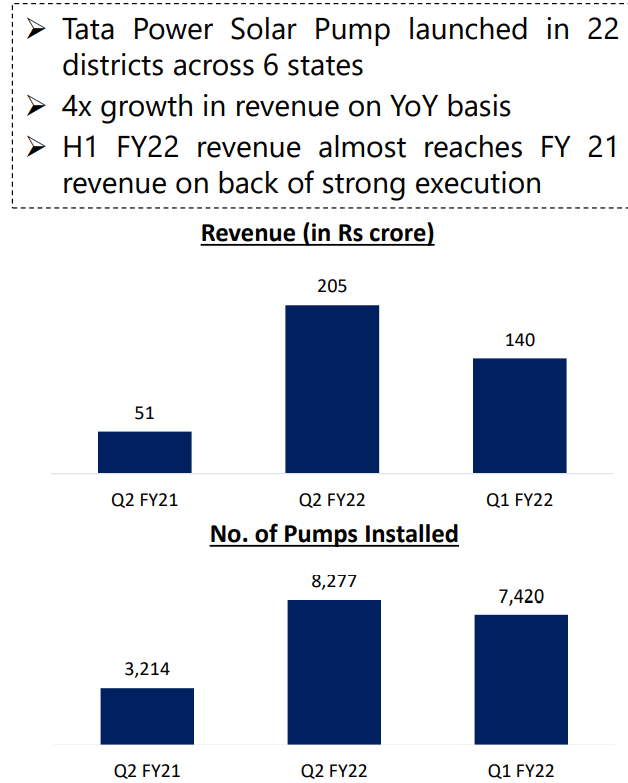 The firm launched its own branded solar pump, Kshitij during the quarter, and Solar Pump growth has been very strong, at 4x on revenue basis when compared to corresponding quarter last year.

The firm continues to maintain debt at FY 2021 levels, leaving it with enough leverage to grab any opportunity that comes its way for inorganic growth, or for larger projects.

Long-term Finance at Low Rates for Power, RE in Budget, e...

Power Ministry Issues Guidelines For Faster Roll Out Of C...