Home » News » SWTD Bets on the Success of Solar Boats

SWTD Bets on the Success of Solar Boats

Starting in April 2019, the department will launch three solar boats into its service across the backwaters of Kottayam and Alappuzha districts. 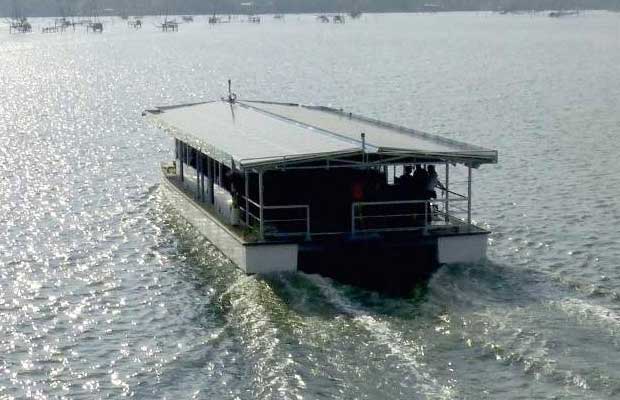 The State Water Transport Department (SWTD) of Kerala is out to take maximum advantage of the sun, as it plans to introduce three solar-powered boats into its service after the success of its first such boat.

Starting in April 2019, the department will launch three solar boats into its service across the backwaters of Kottayam and Alappuzha districts.

Two of these boats will operate as ferry services between Vaikom – Thavanakkadavu and Panavally – Perumbalam sectors, the third one will operate as a cruise service along the Punnamada and Vembanad Lakes.

According to Shaji V. Nair, Director, SWTD, the Department is on the last lap of works on the Rs 3.5 crore double-hull solar cruise boat.

“Powered by lithium-ion batteries having an 80 kWh total capacity, the AC double-decker boat will have 100 push-back seats on the lower deck and a party area on the upper deck,” he said.

Besides the three new boats this year, more solar-powered boats are slated to join the SWTD fleet in the coming years.

“The objective is to turn ourselves into full green operation through such environmentally sound services. The success story of Aditya, which completed two years of operation earlier this month, has indeed proved it an achievable target,” Nair added.

Tags: India, Kerala, solar boat, Solar Energy, SWTD, SWTD Bets on the Success of Solar Boats
"Want to be featured here or have news to share? Write to info[at]saurenergy.com