Solar Powered Boat Service to Commence from January 12 in Kerala

Kerala will script a new chapter in its transport sector when a solar powered boat will start its first service from Vaikom in Kottayam district, about 180 Kms from here, on January 12. 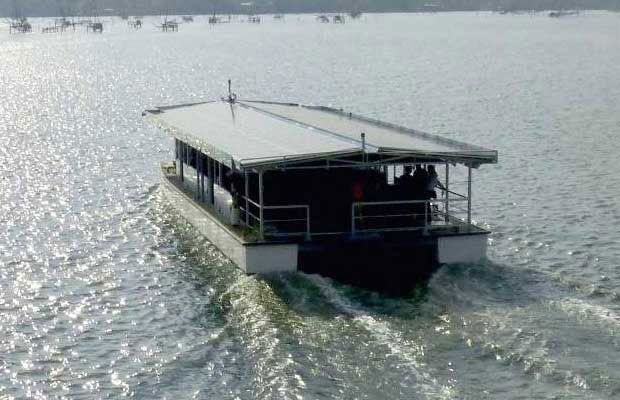 State Transport Minister A K Saseendran said, ‘‘The solar powered boat would conduct its first service with 75 passengers on January 12 from Vaikom to a place near Kochi.”

The service will be offered as part of the state government’s initiative to shift from diesel and petrol to other sources of energy, in-order to curb growing environment pollution, Saseendran stated.

Similarly, the government also plans to switch to CNG and LNG run vehicles in the state, he added further.

Stating that infrastructure development was one of the main focus of the CPI-M led LDF government, Saseendran said an integrated transport system would be developed in Kochi, soon.

As part of the proposed project, the Kochi metro, road and water transport systems in the city would be integrated, he said.

On the financial crisis faced by Kerala State Road Transport Corporation (KSRTC), he said the government stand is that it cannot be resolved by taking loans and pushing the Corporation into further debts.

“The main problem is the huge gap between the revenue and expenditure of the Corporation. The system of taking loans and resolving the issue temporarily has plunged the Corporation into crisis,” he said.

The total debt of the Corporation stood at Rs 3000 crores, he added.