The country’s first solar ferry boat ‘Aaditya’ was launched in the 2.5-km Vaikom-Tavanakkadavu sector, even as the state government sought Central financial assistance to roll out 10 more such passenger boats as part of its aim to replace the existing fleet of diesel boats with that runs on solar power. 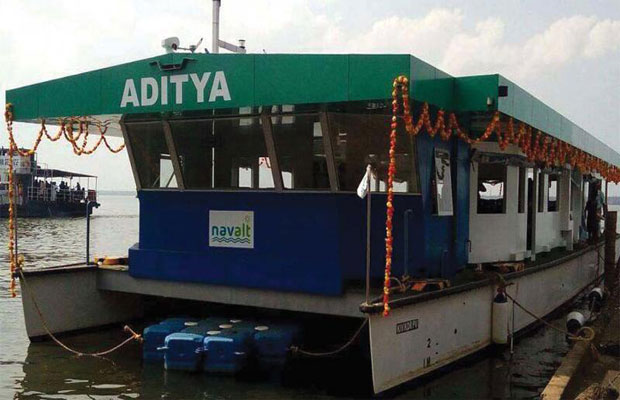 “I’ll consider the state’s request for 10 more solar power ferries which is in line with our policy to encourage renewable sources of energy. Besides ensuring clean water bodies, the solar ferries will help in fuel efficiency and less cost of operation,” the union minister said.

He said the Centre aims to produce 1 lakh MW electricity per annum from solar energy in 2022 from the current 9500 MW. “Our target is to produce 2.25 lakh MW of clean energy per annum using solar power, wind, hydro and other renewable energy sources.”

Chief Minister Pinarayi Vijayan said the government has envisaged various projects like Water Metro and Vaikom-Ernakulam fast ferry service to develop state’s water transport. “We’ll do this without increasing fares. The coming days will see infrastructure development like building of more dockyards, stations and solar boats. The State Water Transport Department (SWTD) will replace its existing fleet of diesel boats (50) with solar-powered ones in a phased manner,” he said.

The SWTD will daily operate 22 schedules of the solar ferry between 7 am and 7 pm. During peak hours, the boat, which has 78 roof-top solar panels, will conduct services at a 10-minute interval and 15 minutes at other times. The boat can run at a maximum speed of 7.5 knots and cruises without any noise and minimal vibration compared to the normal diesel ferries.