Marking a red letter day in green energy initiatives of the Southern Railway, a coach powered by solar panels was operated on a trial basis in Salem. 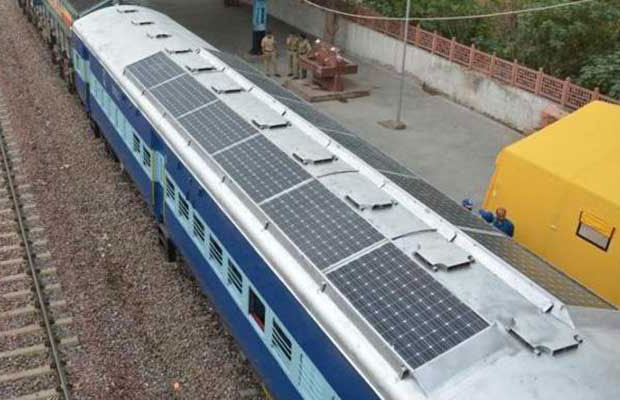 “The single coach fitted with solar panels was attached with the inspection rake and observed. We were satisfied. In Jan Shatabdi Express, the coach would be operated on a trial basis and subsequently we may go for solar panel fitted coaches for the entire train,” said a railway official. Railway authorities would seek clearance from the Commissioner of Rail Safety shortly to go ahead with the move.

Railway authorities said that the solar panels would power 35 lights and 24 fans in the coach. This would help us save 1700 liters of diesel per annum per coach,” said an official. The cost of installing the solar panels works out to Rs. 7 lakh per coach, but the Salem based company – Ind Aussie Solar Private Limited – which supplied the panels, will charge the railways Rs. 3 lakh per coach only, to promote the imitative.

Before going ahead with the green initiative, the existing conventional lights in the coaches need to be changed to LED lights. We would also take into considerations safety concerns. We will do a trial run till we are satisfied and after addressing all concerns we will go for solar paneled coaches for a full train,” said the official.

“According to our assessment, carbon footage would be reduced by 4.5 tonnes per coach per annum if they are powered by solar panels,” the official said. The solar panels have been mounted on a specially designed metallic structure to withstand high wind velocity, vibration and shock during train movement.

Johri also inaugurated six solar power plants of 15 kw capacity in as many stations in the Salem division.

Later, Johri told reporters that the southern railway has decided to extend the special train from Coimbatore to Chengelpet till Tambaram, a long pending demand of commuters from Salem.