The Rs. 30 lakh solar tree will be used for charging visitors’ phones or be providing free Wi-Fi to the visitors. 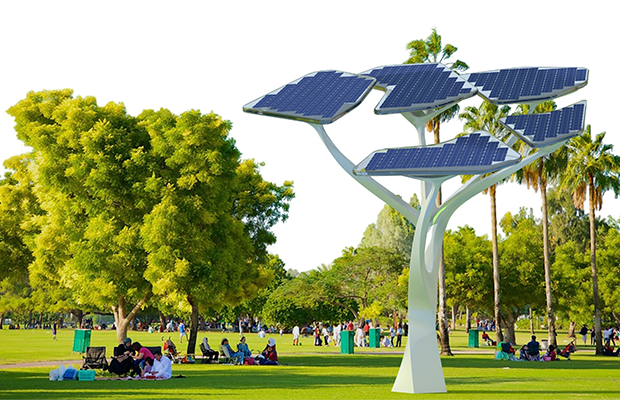 As a step towards being a smart city under the ‘Smart City Mission’, Municipal Administration Minister SP Velumani inaugurated a solar tree in city’s zoological garden and amusement park, VOC Park.

The Rs. 30 lakh solar tree will be used for charging visitors’ phones or providing free Wi-Fi to the visitors.

JC Media Entertainment’s R Maha Prabhu said, “While its trunk is made of metal rods covered with fibre, the leaves are made of zinc. It is equipped with a solar panel that can generate 1,500watts. But it will consume only 1,100watts. Ten benches have been placed under the tree and over 30 people can sit there at a time. Those within a range of 350meters can use the Wi-Fi. Multiple charging points to charge mobile phones have also been provided.”

Moreover, the city corporation will soon set up 24 such structures at bus stations, parks and major junctions across the city, the minister said.

“To create awareness about government programs, notifications will be displayed round-the-clock on an LCD panel at the facility. Over 15 advertisement boards have been set up around the structure. The company will operate and maintain the facility and will generate income by displaying advertisements on the hoardings there. Including advertisement tax, the civic body will earn about Rs 18.25lakh a month from the 25 trees,” a civic body official told TOI.

“The designers opted for an artificial structure since a real tree would wither over a period of time and the entire structure needs to be replaced after that. We have asked them to set up such a facility under a real tree,” the official added.