According to a new report global annual solar installations in 2020 will reach 142 gigawatts (GW), recording a 14 percent rise over the previous year.

Global solar installations will continue double-digit growth rates into the new decade, according to the new “2020 Global Photovoltaic (PV) Demand Forecast” by IHS Markit. New annual installations in 2020 will reach 142 gigawatts (GW), recording a 14 percent rise over the previous year.

The expected 142 GW is seven times that of the entire capacity that had been installed by the start of the prior decade (20 GW in 2010). The growth has been substantial in terms of geographic reach as well. There were 7 countries with more than 1 GW of installed capacity in 2010, most of them confined to Europe. The report expects more than 43 countries to meet that threshold by the end of 2020.

“Another year of double-digit global demand growth in 2020 is proof of the continued and exponential growth of solar PV installations in the last decade,” said Edurne Zoco, director, Clean Technology & Renewables, IHS Markit.

“If the 2010s were the decade of technology innovation, steep cost reductions, large subsidies and dominance by a few markets then 2020 marks the decade of emerging unsubsidised solar, diversification and expansion of solar installation demand across the globe, new corporate entry players and increasing competitiveness versus conventional energy sources.”

Large markets such as China will continue to have an outsized share of new installations into the foreseeable future. However, the over-reliance on China for global solar installation growth will continue to decrease in the coming years as more capacity is added elsewhere. Installations outside of China, the world’s leading market, grew by as much as 53 percent in 2019 and are expected to continue growing by double digits in 2020. Overall, the top 10 solar markets are expected to see their collective share of the market fall to 73 percent, down from 94 percent in 2010. 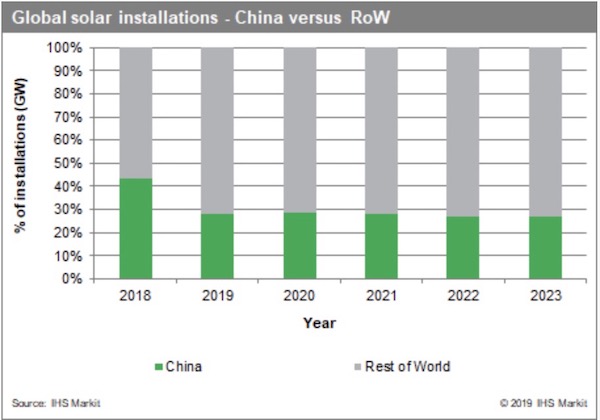 Regional highlights from the report:

China – Solar demand in 2020 will be lower than historic installation peaks of 50 GW in 2017. Demand in China is in a transitional phase as the market moves towards solar being unsubsidised and competing with other forms of generation and there is some lingering uncertainty while awaiting the release of the new 14th Five-Year Plan to be announced next year.

United States – Installations are expected to grow 20 percent in 2020, consolidating the United States’ position as the world’s second-largest market. California, Texas, Florida, North Carolina and New York will be key drivers of U.S. demand growth over the next five years.

Europe – After nearly doubling installations in 2019, Europe is expected yet to continue growing inn 2020, adding more than 24 GW—a 5 percent increase over 2019. Spain, Germany, Netherlands, France, Italy and Ukraine will be leading sources of demand, accounting for  62 percent of total EU installations in the coming year.

India – Following a flat year in 2019, due to policy uncertainties and the impact of import duties on solar cells and modules, installations are expected to grow again and surpass 14 GW in 2020. Lower module prices and a large pipeline of projects are expected to spur the return to growth.