Siemens Smart Infrastructure, in partnership with Fluence, was awarded a contract by the Portuguese energy provider EDA – Electricidade dos Açores to build a battery-based energy storage system on Terceira, the second biggest island in terms of electrical consumption of the Azores archipelago in the Atlantic Ocean. The project aims to make the island more sustainable and is scheduled for completion in 2021. 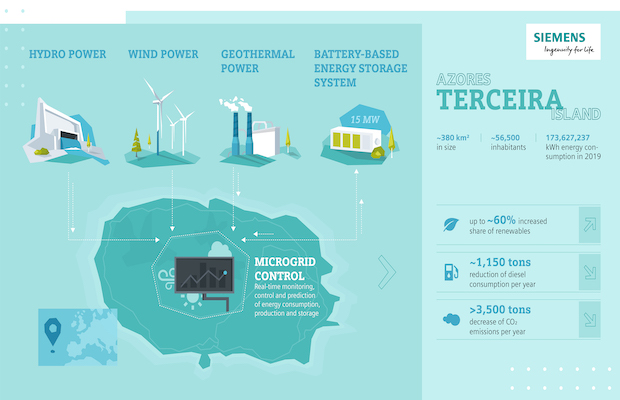 The system uses Fluence’s latest generation technology, which combines factory-built hardware, advanced software and data-driven intelligence. With a power capacity of 15 megawatt (MW), the Gridstack system will be one of the largest stand-alone (island) battery-based energy storage systems in Europe. Pre-configured to handle the most demanding grid applications, it will mainly regulate frequency and voltage of the electrical grid, increase the security of supply providing spinning reserve, and absorb and store excess energy produced by renewable sources and feed it back into the grid during times of peak consumption or low production.

Implementing this system, associated with a further expansion up to 6 MW of renewables or endogenous resources, such as geothermal, will enable the island to double its share of renewables in the medium-term, from 20-30 percent to more than 60 percent. Replacing a part of the diesel-based power supply with renewables will result in a reduction of 1,150 tons in annual diesel consumption, and a decrease of CO2 emissions by more than 3,500 tons per year. This roughly corresponds to the CO2 emissions of about 1,500 cars driving approximately 20,000 km per year.

To increase the system’s efficiency, a sophisticated microgrid management system will be used. It affords real-time monitoring and control of the entire infrastructure as well as prediction of energy consumption, production and usage of storage for several hours or even days based on weather forecasts. Siemens Fluence Storage

“This enables us to set out an optimised operation strategy and reach an optimal balance between consumption and production of energy, and increase the security of supply for our customers,” said Duarte José Botelho da Ponte, Chairman of the Board of Directors of EDA – Electricidade dos Açores. “With the storage technology in combination with the microgrid application, we aim to maximise the integration of renewable energy sources on Terceira. At the same time, we would like to ensure a power supply at the highest standards of quality and reliability.”