Saudi Arabia is on a tight deadline. The kingdom has set itself some of the most ambitious economic and social targets in the region, with an aim to revamp its economy completely. Underpinning this drive for change is its youth population, now better equipped than ever to contribute productively. Not only does the kingdom want to retain its place as the largest economy in the Middle-east, but do much better than that, to ensure it becomes a magnet for non-oil sectors worldwide.

At an average age of just 32, Saudi Arabia has a strong cohort of the young, that has acquired quality qualifications in the recent past, thanks to high investments in building up education and health infrastructure. The country now faces the next challenge of ensuring these young citizens find work that is a match for their skill sets as well as aspirations. Unemployment is the highest in the youngest cohort of 21 to 30, adding a level of urgency to the efforts now.

While the pandemic has disrupted some of those plans, the larger plans remain on course. These involve building massive new infrastructure including cities from the ground up, a complete revamp of the industrial landscape, and a shift in investment priority to the domestic market, are all on course. Among the most interesting of course is the push for renewable energy, coming from a country that has promised to be the ‘last man standing’ when oil runs out, or is turned off.

Under the Vision 2030 document of the Crown Prince, Saudi Arabia has a National Renewable Energy Program. Under this, over 35 renewable energy projects are expected to be active by the year 2030, and the production of renewable energy to go from 9.5 GW in 2019 to 27.3 GW in 2024 through the five-year program. The target is 58.7 GW in renewable energy by the year 2030. Those numbers are not just expected to help the kingdom meet domestic power requirements, but also provide the energy needed for a push into green hydrogen, which the country has started laying the groundwork for. Even more importantly, the kingdom is clear that these numbers must be achieved with a far higher level of localisation as compared to what has been achieved till date.

Why Localisation Is All About The Youth

With unemployment at over 14% among Saudi youth, Saudization or, localisation of sectors across the economy has become vital. Not only because the skills that were absent earlier are available locally today, but also because the country seeks to follow a much more sustainable and workable global template for success.

The kingdom’s vision 2030 document lays down the roadmap. While it has broad goals for the country in terms of improvement in life expectancy, growth in reserves and other social indicators, there is little doubt that the focus is on the youth and localization. As both are vital to the future of the country.

Consider just one objective, the target to reduce local unemployment to 7%, and increase women’s participation in the workforce from 22 to 30 percent.

Both these require a much more diverse economy, with a much higher local share of production inputs locally.

This is playing out across sectors today, where higher indigenization is rewarded, and failure to do so as promised can be penalized too.

In the renewable energy sector for instance, an elaborate points system with localization as a critical component is used today to evaluate bids for large projects. Bids with localisation below a cut off level risk being kept out altogether.

The massive sovereign wealth fund of the kingdom today has a mandate to invest at least $40 billion or more annually in the home market.

The biggest initiatives, like the development of Neom, the all new futuristic city is a case in point. Not only is Neom set to showcase everything the Kingdom wants to be, but it is planned to be a city that exports, rather than just consumes.  Be it energy in the form of green hydrogen powered by renewable energy, or world class logistics, a thriving SME and private sector and more. Thus, SME sector contribution to economy has been targeted at 35% from the existing 20%, while share of private sector in overall GDP is aiming for 65%.

Involving the youth in a greater way is considered key to achieving these goals today, as their interests will be aligned to the country. The greater self sufficiency will also offer the country a greater degree of control over its destiny, instead of being buffeted by what happens in global markets only too easily today.

Focus sectors include sectors where the Kingdom has a natural advantage, aligned with sectors that can create the kind of jobs and opportunities that will attract Saudi youth. That means energy, chemicals, retail, logistics, and more are all in focus today.

For the youth, higher localization is not just a matter of greater pride in the economy’s dynamism, but also about the many opportunities it will create for them to look beyond the government for opportunities.

From achieving 75% localization in the oil and gas sector, to an economy that ranks in the top 15 globally, and makes massive strides in ease of doing business as well as e-governance, the targets are huge.

The high investments in education and healthcare mean that  unlike the attempts of the past, Saudi Arabia today actually has an opportunity to achieve its ambitions, using local talent.

A strong start has been made with renewable energy. Seen as a critical input in the global push to decarbonize sectors by first electrification, and next ensuring an ever higher share from renewable resources. Saudi Arabia has made the brave call to align itself with the world, rather than push back as one of the biggest oil producers. In doing this, it has the advantage of knowing that its lower cost oil wells can continue to supply the world far beyond the more expensive oil in many regions today. 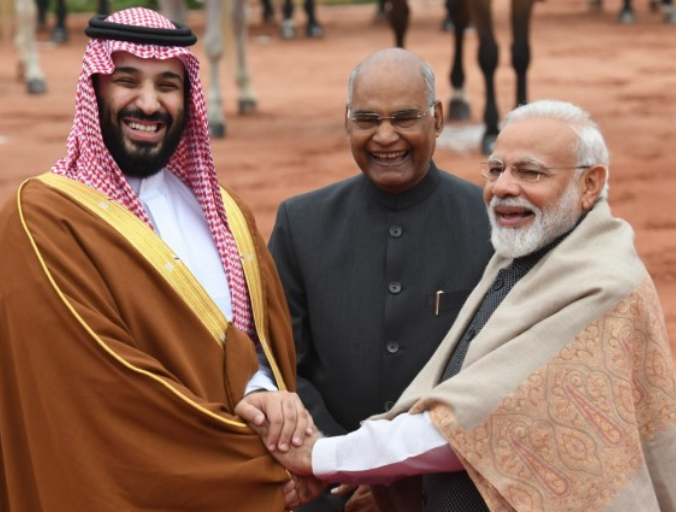 MBS and PM Modi During a State Visit To India

Conclusion. The Role of Local Champions In The Transition

Many Saudi Firms today have achieved global scale and competencies across sectors. These firms offer the government a ready home resource to execute on its plans, with the vast experience and inputs they bring. Be it manufacturing and Infrastructure firms, with their global footprint and experience, are a valuable resource to ensure that good intent is backed by strong ability. Their extensive manufacturing operations in Saudi Arabia and acceptance of the products globally have made these stand out stories that offer a readymade success template. From Aramco, the bell weather for the economy, to smaller firms like Alfanar in infrastructure, we are likely to see Saudi firms push more aggressively outside the kingdom, to ensure the Kingdom doesn’t miss out on the opportunities to come.