India’s renewable energy sector has seen a total investment of Rs 1.32 lakh crore between FY2017-18 and the current fiscal year

India’s renewable energy sector has seen a total investment of Rs 1.32 lakh crore (Rs 132625.89 crore) between the financial year 2017-18 and the current fiscal (until December 31, 2019), Union Minister of Power and New and Renewable Energy, RK Singh has said.

Answering a question raised in the Rajya Sabha, Singh said that the country has set a target of installing 175 gigawatts (GW) of renewable energy capacity by 2022. And that as of January 1, 2020, the country has installed 85.90 GW of Renewable Energy (RE) capacity which constitutes 23 percent of total installed power generation capacity in the country.” 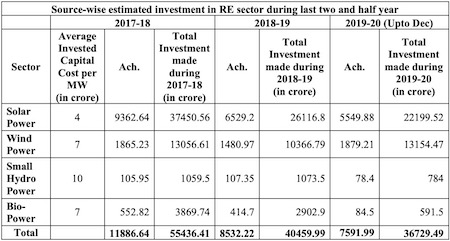 The year-wise breakup of the financial figures issued by the ministry shows that 2017-18, with 11886.64 MW of renewable energy capacity additions, saw the maximum investments over a single fiscal year with a total of Rs 55436.41 crore invested in the sector.

The minister had previously said that the steps being taken by the Government to boost the investment in the sector in the country included:

Answering another question, the minister informed that “as per the report ‘Renewable Energy and Jobs Annual Review 2019’ by the International Renewable Energy Agency (IRENA), the total employment in the renewable energy sector in India in 2018 was 719,000 jobs. IRENA estimated the employment in solar PV as 115,000 jobs (grid-connected), wind energy sector 58,000 jobs and in hydropower sector 347,000 jobs.”