India needs to install 90 GW of solar in five year – at a rate of 18 GW per year. Most states have specified RPO targets. However, due to the lack of enforcement of RPO regulations and the absence of penalties when obligations are not met, many of the state DISCOMs (distribution companies) are not complying fully with their RPO targets.

Renewable Purchase Obligation (RPO) is the single most important policy driving renewable energy installations in India towards achieving the aggressive goal of installing 175 GW by 2022 with solar making up 100 GW. Over the past three years, as states scrambled to fulfill their RPOs, cumulative installation figures for solar and wind energy increased exponentially, but unless compliance improves drastically it will be a challenge to meet the lofty 2022 installation goals said Mercom Capital in its report. 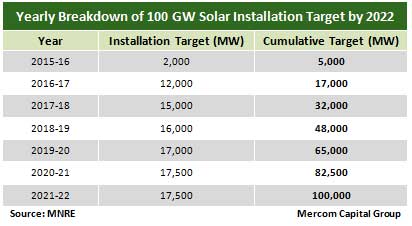 “The installed capacity of grid interactive solar power in the country at the beginning of the 11th five-year plan period was zero. This rose to 2,656 MW by March 2014, and we have now crossed 10 GW of solar thanks to RPO,” said a MNRE official to the research firm. Trading in renewable energy certificates (RECs) has also increased. States with high solar and wind potential are tendering more projects. “Direct purchase of electricity generated from renewable energy sources was the preferred option to meet RPOs. Between 2010 and 2014, only 4.77 percent of RPO compliance was through REC mode, this has changed now,” stated another MNRE official.

India has undoubtedly made remarkable progress over the last seven years. However, according to Mercom Capital- India needs to install 90 GW of solar in five year – at a rate of 18 GW per year. Most states have specified RPO targets. However, due to the lack of enforcement of RPO regulations and the absence of penalties when obligations are not met, many of the state DISCOMs (distribution companies) are not complying fully with their RPO targets.

“Most states have defaulted on their RPOs, and this is the fifth year in a row. In the current financial year even Gujarat and Rajasthan have not been able to comply with state RPO,” stated a Central Electricity Regulatory Commission (CERC) official.

In some cases, rather than imposing a penalty on defaulters, the state electricity regulatory commissions (SERCs) have allowed DISCOMs to carry the shortfall forward to the next year. This exemption made by Delhi Electricity Regulatory Commission (DERC) stands out in this aspect, as the DERC had not imposed a penalty stating, “these are the initial days of DISCOMs dealing with renewable energy.”

If all states adhere to the RPO targets set by respective SERCs, 17.7 GW of solar should be installed by end of the current financial year. The current solar RPO is 2.75 percent, actual cumulative installations as of March 20, 2017, comes to 10.8 GW according to Mercom India Solar Project Tracker. The RPO deficit is 6.9 GW (-39%) based on MNRE RPO targets for upto FY2016-17.

How States Have Fared So Far:

Twenty-five states and union territories are behind on their specified solar RPO targets for the current financial year, for a solar RPO deficit of 2,033.94 MW (-64%). 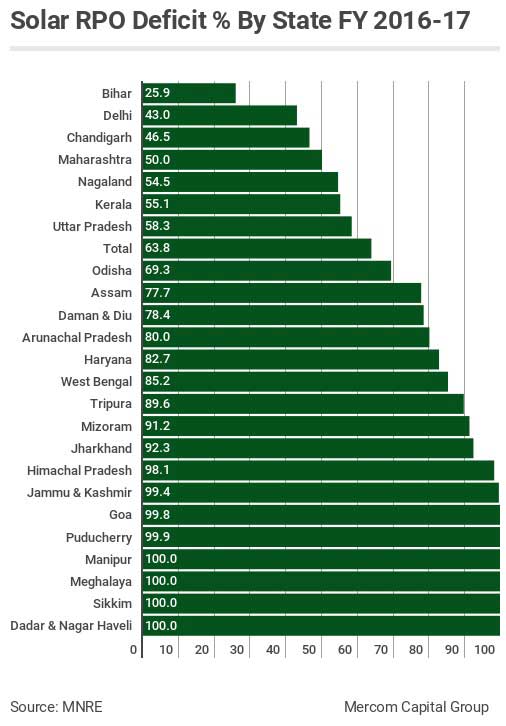 Renewable energy installations in the state of Madhya Pradesh have gone up. The state was affected by grid and transmission issues which slowed installations; but now Madhya Pradesh is going to achieve all targets. The Rewa Solar Park will go a long way to address our RPO, stated an official at Madhya Pradesh Paschim Kshetra Vidyut Vitran.

In the state of Kerala, they rely on other states to import power. Kerala not meeting RPO is largely due to the stagnant renewable energy sector in the state. We have not witnessed large scale renewable energy installations in a long time, stated an official at Kerala State Electricity Board.

The growth in generation capacity has been stagnant in West Bengal. This year new capacities have been tendered and we are trying our best to comply with the RPO, stated an official at West Bengal Electricity Distribution Company Limited.

In Bihar, grid-connectivity and transmission infrastructure is in a state of neglect and is the reason behind why renewable energy installations are not taking place, stated an official at South Bihar Power Distribution Company Limited.

There are 22 states and union territories that are behind their non-solar RPO targets. There is a non-solar RPO deficit of 9,088.11 MW.

Twenty-two states and union territories will require over 9,088 MW to fulfil the non-solar RPOs for FY2016-17.

“To achieve even a three percent RPO compliance by 2022, we would need ~34,000 MW of solar capacity,” stated an official at the MNRE.

A CERC official commented that the financial turnaround of DISCOMs is vital to meeting RPO targets. “For stricter RPO enforcement, the liquidity of DISCOMs is a key consideration given that many of the state DISCOMs are cash strapped and financially unsound.”

A combination of measures are being taken to encourage RPO compliance including new policies, improved transmission measures and financial support.

A new tariff policy is betting on RPOs to reach its 2022 installation goals. The policy prescribes a solar RPO of eight percent by 2022. It has also made it mandatory for DISCOMs to procure 100 percent of power generated from waste-to-energy projects.

Interstate transmission charges and losses have been waived for wind and solar projects, and this could to a certain extent aid RPO.

The Green Energy Transmission Corridor which is currently under development is expected to remove transmission bottlenecks. The current cost of wind and solar power is coming close to being on par with thermal and other conventional sources. Once this corridor is complete, the grid will allow for easy evacuation and transmission of renewable energy, thus spurring project developers, stated a SECI official.

The financial concerns surrounding DISCOMs are being addressed through the Ujwal DISCOM Assurance Yojana (UDAY) program, under which ~Rs.2.07 trillion (~$30.99 billion) in DISCOM debt has been restructured so far. If UDAY fails to fix the financial issues ailing DISCOMs, solar uptake will suffer and so will installations and RPO compliance. 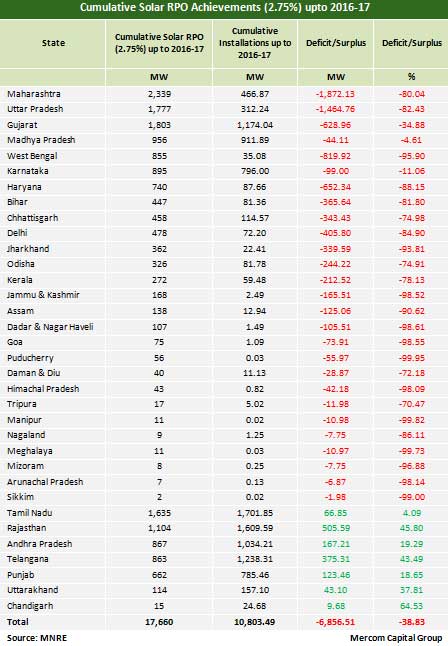 The World Bank is making financing available for renewables in India and other development banks are following suit. This has provided developers and EPC contractors with easy financing at low rates and is bound to spur installation activity, stated the SECI official.

By interlinking various government incentives and policies such as the integrated power development program, rural electrification, and the Viability Gap Funding program, an environment can be created where states easily meet their RPOs, stated the CERC official.

If states make it easier for project developers like they did in Rewa, states will easily meet their RPOs as projects will be developed in less time compared to the current project completion timeframes, stated a MNRE official.

“In the Indian market, it is not just about strict compliance and penalizing states to push for higher installations levels. There are a lot of underlying issues that the government needs to address like DISCOM financials, must-run status, transmission and evacuation issues, on-time payments and payment guarantees, and deemed generation benefits. Solar companies and investors have demonstrated that they are willing to take the risk and invest in the market. It is the government that needs to catch up and provide low-risk, conducive market conditions for renewable installations to thrive,” said Raj Prabhu, CEO of Mercom Capital Group.