Researchers at NREL have developed a technique to sequester the lead used to make perovskite solar cells, a highly efficient emerging PV technology. 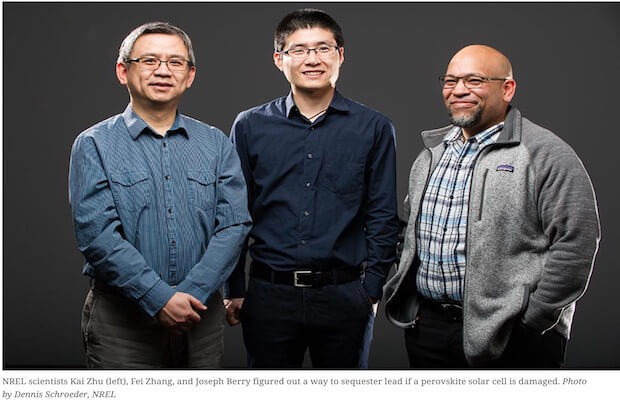 The light-absorbing layer in a perovskite solar cell contains a minute amount of lead. The presence of this toxic material in the developing technology could turn some consumers away when perovskite solar cells become commercially available, said Kai Zhu, a senior scientist in the Chemistry and Nanoscience Center at NREL.

Zhu and other researchers at NREL and NIU outlined their solution in a paper newly published in Nature, titled “On-Device Lead Sequestration for Perovskite Solar Cells.”

A lead-based perovskite solar cell’s highest efficiency—its ability to turn sunlight into electricity—runs close to 25 percent. Without the lead, that efficiency is cut in half.

Silicon solar panels, the industry’s dominant technology, contain lead solder, but that lead is not water-soluble. The lead used in perovskites can be dissolved in water. While existing analyses show this is not a major concern, the researchers developed a method to ensure the lead is sequestered should a cell become damaged. They coated the front and back of a perovskite solar cell with two different lead-absorbing films. Then, they damaged the two sides of the cell—slashing one with a knife and smashing the other with a hammer.

The researchers then immersed the damaged cells in the water of various types, including pure water, acid water, and even flowing water to simulate heavy rain. They found that these lead-absorbing films can prevent more than 96 percent of lead from leaking into the water from the damaged cells. The addition of the lead-absorbing layers did not affect the performance of the solar cell, the researchers found.

“This is a big step in the correct direction,” Zhu said. His co-authors are Fei Zhang and Joseph Berry of NREL, Haiying He of Valparaiso University, and Xun Li and Tao Xu from NIU. Xu served as the lead researcher from NIU. “Lead toxicity has been one of the most vexing, last-mile challenges facing perovskite solar cells,” Xu said. “Our on-device lead-sequestration method renders a ‘safety belt’ for this fascinating photovoltaic technology.”

The research was funded by the National Science Foundation and the U.S. Department of Energy’s Solar Energy Technologies Office.