Renewables not Coal & Gas Should be Focus of Vietnam’s Latest PDP: IEEFA

Vietnam’s recently published draft power development plan for 2021-2030 (PDP8) has failed to acknowledge the importance of developing a more flexible system that can accommodate a changing technology mix, according to a new report from the Institute for Energy Economics and Financial Analysis (IEEFA). 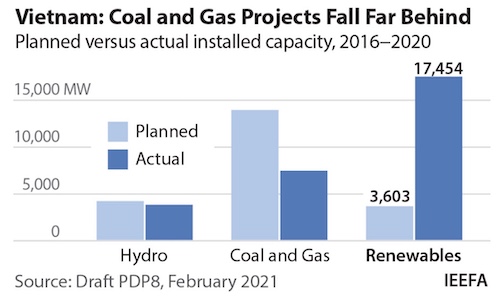 “After a decade filled with disappointments from the fossil fuel industry, planners successfully tested the dynamism of renewable energy in Vietnam’s fast-growing market,” says report author IEEFA Director of Energy Finance Studies Asia, Melissa Brown. “Many conventional coal and gas-power projects failed to progress during the development process, only managing to meet half of the targeted capacity for 2016-2020.

“Solar power developers however over-delivered by five times, and they have done so in a fraction of the time. This evidence would surely inform the next stage of Vietnam’s power development,” Brown added.

The authors of the report believe that unfortunately, planners have instead opted for generation-centric decisions in shaping the recently published draft PDP8. And thus, instead of acknowledging the importance of developing a more flexible system, base-load coal and gas-fired power will continue to dominate 57 percent of the pipeline to 2030 in the draft PDP8.

As the government reviews plans for PDP8, IEEFA’s new report outlines four issues that deserve attention if Vietnam hopes to diversify its generation mix, meet new demand for sustainable power, and control power tariffs, with renewables arguably playing a bigger role in PDP8, and not less.

PDP8’s usefulness as a roadmap will be limited due to the rapid pace of energy transition globally.

2. Baseload fossil fuel options come with risks that must be acknowledged and mitigated

Vietnam’s high reliance on coal power projects, which are subject to frequent delays, has put Vietnam on the brink of serious power shortages on more than one occasion.

3. Failure to account for real costs of fossil fuel power will hurt rate-payers in the long-run

One of the most important take-aways from the rapid shift in global power markets is that power sector planners are increasingly vulnerable to fatal design errors if they fail to account for the real costs associated with different technology and fuel choices.

4. Underestimating the need for green power will threaten GDP growth

Over the past two years, Vietnam’s economic growth potential has diverged sharply from what IEEFA has observed elsewhere in Southeast Asia.

“Vietnam must take bolder steps to win the confidence of high-value foreign investors that are working hard to meet the needs of their global customers,” concluded Brown. “The market’s appetite for renewable energy investment is already there. Now it’s time to realize steady cost improvements.”