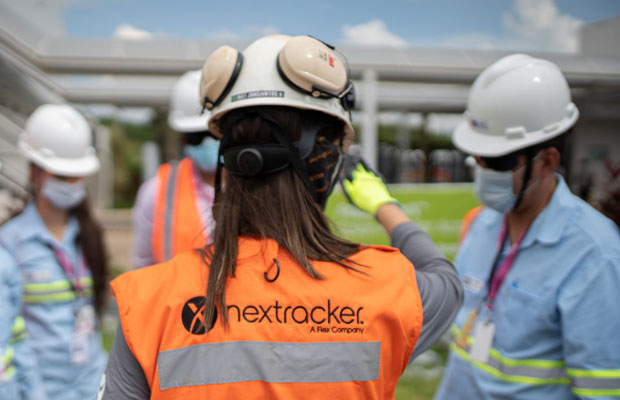 Nextracker™, a Flex company, announced that it has been selected by leading Brazilian EPC firm Andrade Gutierrez and developer Elera Renováveis (formerly Brookfield Energia Renovável) to supply 830 MW of its world-leading solar tracker technology, NX Horizon™ for Phase I of the Janaúba solar complex located near the city of Janaúba, Minas Gerais, Brazil. When completed, the plant will be the largest of its kind in South America and is scheduled to become operational by early 2022.

“We are delighted to be working with Nextracker on the Janaúba solar plant,” said General Manager for Renewables, Patricio Pavez at Andrade Gutierrez. “Nextracker’s extensive expertise in wind design R&D and engineering and proven bifacial gains were ultimately what led us to select the NX Horizon smart solar tracker.”

“We look forward to working together with Nextracker to cement Brazil’s position as the leader in the solar energy sector in Latin America”, said Beverly Martinez, Technical VP at Elera Renováveis.

Built with field-proven quality and reliability, NX Horizon is the single-axis solar tracker of choice on over 45 GW of projects around the world and will help Elera Renováveis to maximize the Janaúba plant’s performance while minimizing operational costs. Nextracker’s regional office in Brazil will fully support the project with engineering advisory as well as commissioning, asset management and advanced data analytics services for preventive maintenance. Installation crews will benefit from Nextracker’s PowerworX Academy installer training program to learn best practices on site and at the company’s training center in Sorocaba, Sao Paulo state.

“We are honored to work side by side with our partners, Elera and Andrade Gutierrez to deploy Brazil’s largest solar tracker project,” said Marco Garcia, Chief Commercial Officer at Nextracker. “Nextracker’s expert local staff combined with our company’s cutting-edge solar tracker and software technologies will ensure that this historic project will perform to its full potential.”

Brazil is one of the fastest-growing solar markets in the Latin American region, due in part to its high irradiation levels and solar-friendly policies. The country has 7.4 gigawatts of cumulative solar installations to date. Minas Gerais is the top Brazilian state for solar power capacity in the nation.

Nextracker is the chosen PV system technology and smart solar tracker provider for some of the largest solar power plants in the world, such as the 1 GW Mohammed Bin Rashid Al Maktoum Solar Park in the UAE, the 838 MW plant in Villanueva, Mexico, and the 460 MW Western Downs installation in Queensland, Australia.