Renewables Generated More Electricity Than Coal in the US Last Month

Renewable energy (utility-scale solar, wind and hydropower) sources generated more electricity than coal plants in the US in February 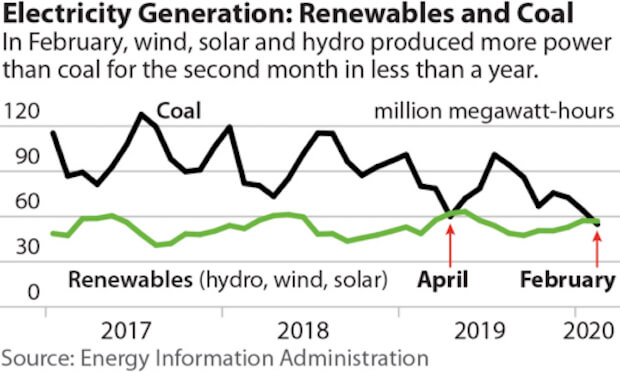 In the dead of winter, renewable energy (utility-scale solar, wind and hydropower) sources generated more electricity than coal plants in the US in February. Specifically, according to data from the US Energy Information Administration’s (EIA’s) new hourly electric grid monitor, renewables generated 56,981,597 megawatt-hours of electricity during February while coal produced 54,733,731 MWh.

The data comes with a few caveats. EIA notes that the numbers are not final (there is a two-month lag until numbers are confirmed in the Administration’s Electric Power Monthly) and that the new web-based resource is still undergoing beta testing. Still, the likelihood that renewable generation outperformed coal during the winter, historically a high-demand season for coal-fired generators, is a clear sign of the rapid transition that is reshaping the US electricity sector.

The first time renewables outproduced coal, last April, was a landmark month according to the Institute for Energy Economics and Financial Analysis (IEEFA). Adding that February 2020’s results are, if anything, even more important given the time of the year and some of the underlying data. As it had noted at the time, the April 2019 results were somewhat influenced by the industry practice of taking coal plants offline during lower-demand seasons (spring and fall) to perform maintenance and upgrades in preparation for higher energy demand during the summer and winter months.

Even more interesting is comparing the daily figures of coal generation last April with this February’s results. February logged 11 days when coal-fired generation totalled less than 1.8 million megawatt-hours (MWh); last April witnessed only five such days. At the other extreme, April 2019 marked 13 days when coal-fired generation topped 2 million MWh; February 2020  recorded only eight. Most tellingly, for the month as a whole, coal-generated an average of 1.98 million MWh daily last April; while this February the daily average was just 1.88 million MWh.

The analysis by Dennis Wamsted is an IEEFA analyst and editor further added that low-cost renewable resources will continue to eat into coal’s share of the electricity market. According to the American Wind Energy Association (AWEA), 9,134 megawatts of new wind capacity came online in 2019, more than half of which (5,746MW) entered commercial service in the fourth quarter. In other words, new wind capacity is just now beginning to take market share away from coal. There is much more wind to come, with AWEA estimating that 44 gigawatts of new capacity are in the development pipeline.

A similar, rapid buildout is underway on the solar side as well. Total solar capacity in the US is now more than 70 GW with an additional 45 GW in the development pipeline, according to the Solar Energy Industries Association. These no-fuel-cost resources pose a looming challenge to the nation’s remaining coal-fired generation capacity in a race that coal is clearly losing fast.

Tags: Coal, Electricity, Electricity Coal US, IEEFA, Renewable Energy, US
"Want to be featured here or have news to share? Write to info[at]saurenergy.com