The electricity system in Indonesia might soon see a glimmer of hope after going more than three years without significant growth in renewable energy investment, a new IEEFA report finds. 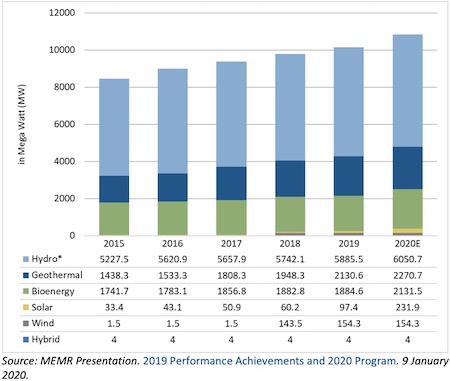 The new report, “Racing Towards 23 percent Renewable Energy”, notes that Indonesia’s Ministry of Energy and Mineral Resources (MEMR) has been preparing for a new Presidential Regulation that would accelerate renewable energy development to reach the 23 percent goal in 2025. Moreover, a renewable energy bill has been included in the House of Representatives’ National Legislation Program (Prolegnas) to handle issues around renewable energy regulation, the report states.

The report finds that the government chose a feed-in-tariff (FIT) to push renewable investment forward, but then highlights research showing that the best system-level results – long-term energy supply at fixed, highly competitive prices – are best achieved via carefully designed auctions. A FIT system pays small generators a generous price for the electricity they feed to the electricity grid, with the aim of encouraging widespread investment interest in renewable electricity production.

The report notes that a system of competitive auctions, in which bidders lower their sale prices until a deal is made, is crucial for at least eight major reasons:

1. A market price is better than a policy price.
2. Auctions provide scalable and cost-effective renewable energy.
3. A well-designed auction takes most of the risk out of renewable generation.
4. Auction design can and must address local conditions.
5. Good auction design gets the off-take commitment and permit process right.
6. Funders will insist on technical feasibility and creditworthiness.
7. The government can find ways to lower the cost of capital, a major determinant for lower clean energy pricing.
8. Reducing generators’ upfront costs is better than paying out subsidies.

“The case for auctions versus one-off project negotiations has been vividly demonstrated by corporate power buyers, such as Google,” the report notes. “When Google ran its first online reverse auction in 2019, it was overwhelmed by the results. Google managed to procure 18 projects with a total of more than 1500 MW of wind and solar capacity. The reverse auction also resulted in an impressive 17–23 percent price decline versus the opening price. The key to this is a very clear procurement process and well-designed conditions set in advance.”