Swift Solar, a solar PV technology company working on perovskite technology, has announced that it has secured more than USD 8 million in Series Seed 2 funding, with an additional USD 1.5 million expected to close soon, for a total of USD 9.6 million.

“We have to accelerate innovation to limit climate change,” said Sid Sijbrandij. “Swift Solar’s cutting-edge solar technology is an important piece of the puzzle, and the Swift team is second to none. I’m proud to help accelerate their work so it can meet the urgency of the moment.”

The firm has stated that the funding round will be used to expand R&D capabilities, develop prototypes, and grow the Swift Solar team.

“Today’s industry leaders recognise that perovskite technology represents new possibilities for the future of solar,” said Co-Founder and CEO Joel Jean. “The Swift Solar team is working nonstop to make solar panels more affordable, more efficient, and easier to install. With this funding, we can move faster on our path toward powering tomorrow’s zero-emissions vehicles and power grids with high-performance solar.”

The firm to date has raised over USD 16 million in equity financing. And it is supported by non-dilutive funding from the National Science Foundation, the U.S. Department of Energy, and the Office of Naval Research.

The firm is currently working on developing a new solar PV technology in metal halide perovskites, which it expects could fundamentally outperform today’s silicon and thin-film technologies. The firm is confident that within 10 years, perovskite tandems could be more efficient, more affordable, and more scalable than any PV product on the market. 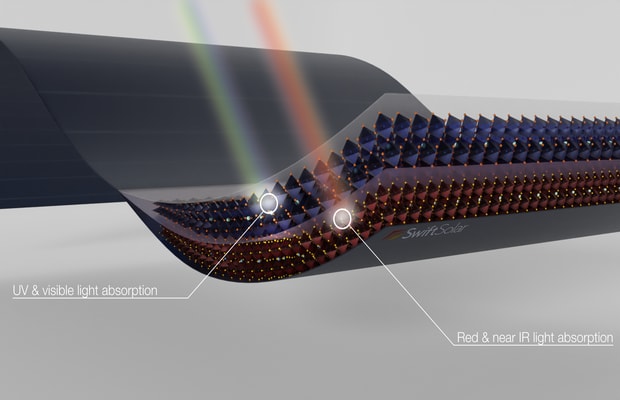 It further added that flexible perovskite solar panels can reach unparalleled power-to-weight ratios and can be rolled up like a tarp and laminated onto nearly any surface. And they enable multijunction, or tandem, cell structures that could reach power conversion efficiencies of over 40 percent, breaking through the ~30 percent limit of current technology and providing more watts per dollar spent on installation.

With this combination of higher efficiency, power density, and flexibility, the firm believes that its perovskite PV technology could keep drones in the sky for months at a time, recharge electric vehicles, power homes, and provide supplemental and off-grid power in developing countries and disaster areas.