Solis has been nationally recognized for its R&D and innovation by the National Development and Reform Committee. 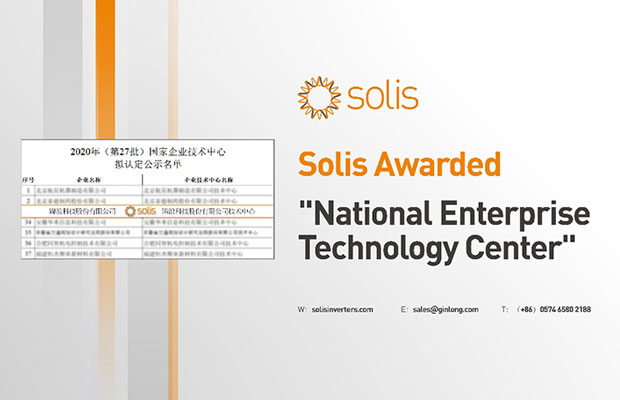 Ginlong Technologies, a global leader in photovoltaic string inverter manufacturing, has been selected as a winner in the National Enterprise Technology Center by Division for Innovation and High-tech Development by the National Development and Reform Commission. It marks that Solis’ commitment to R&D and innovation has been highly recognized by both the industry and in nationally!

Driven by technology and innovation, Solis has moved to its 5th generation platform. 15 years on since the company began, Solis has joined the National Torch Program in China, awarded as a standard to companies in the PV manufacturing industry. Solis has also received the title of “Green Factory”, won awards from the “Zhejiang Enterprise Technology Center” and “Zhejiang Enterprise Research Institute”. Solis attaches great importance to scientific and technological innovation, continuously strengthening its investment in technology R&D.

Compared with the first three quarters of 2019, the company’s R&D expenditure during the same period in 2020 increased by 118%. Solis established a market-oriented platform with other like-minded companies, across a combination of fields such as production, education and research. This formed an innovative, high-tech platform for greatness. Solis’ achievements are beyond our imagination and we will continue to strive for more success and recognition.

“We feel so honored to have this award., Solis has always taken innovation and development as its starting point, and continuously improved its ability to respond to domestic and foreign market demands.” said Mr. Kun Zhang- Chief Product Manager of Solis Global HQ. Solis products have been exported all over the world. It was rated as the world’s top PV brand, and its single-phase string inverter shipments ranked top two in the world (Source: Wood Mackenzie). Solis inverters have been installed in some of the world’s largest and most iconic buildings; Shanghai World Expo, Shanghai Volkswagen, Eiffel Tower, and Mexican military battalions. Going public in March 2019 further marks the success of Solis. Closer to home the “shared-workers” strategy during COVID-19 reported by CCTV, and cooperated with Sinopec, heralded a brand-new green energy solution.

Yiming Wang, President of Solis, expressed that” Solis will actively carry out partnerships with universities and institutions with the aid of the ‘National Enterprise Technology Center’. At the same time, we will expand the team of technology talents, strive to be a leader in PV industry and spare no effort to accelerate the development of energy structure away from coal-based power generation to clean and low-carbon energy.”