At the Disruptive Solar Technology session at WSTS, solar PV progress over the years, and key trends that will lead it into the next decade were discussed.

At the Disruptive Solar Technology session at the first World Solar Technology Summit (WSTS) by the ISA yesterday industry leaders discussed the progress that solar photovoltaic technology has made over the years and the key technology trends that will lead it into the next decade and beyond.

Professor Eicke Weber, Chairman of the European Solar Manufacturing Council (ESMC) discussed the meteoric rise of solar PV globally since its inception as an idea, growing at a CAGR of 38 percent since 1992 (till 2019). He then went on to detail how fast solar has caught on to other sources of alternate energy, and now trumps all of them for annual installations year after year. Almost double the amount of capacity installations every year for the last couple of years when compared to the next best source i.e. wind.

He added that at the rate at which solar is expanding, we’re headed towards nearly 1 TW of installations being possible in a single year.

Weber further added that this rapidly growing solar market shows disruptive innovations along the whole value chain, from materials and wafers to cells, modules, and system integration. And that at the core that is the PV cell technology, we are experiencing a transition. A transition from 2nd generation (PERC) to 3rd generation (Passivating Contacts – HJT) high-efficiency technologies (graph). And that with this transition, we will witness the efficiency of panels increasing from the 20-21 percent to high 24 and even 26 percent in a few years. 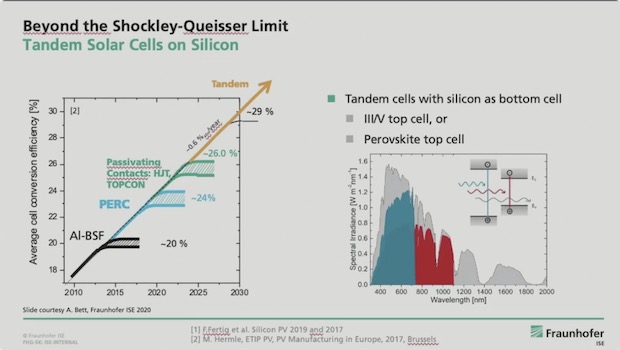 Presented by Weber during.

However, there is another disruptive technology lying in the wait according to Weber, which will be the fourth generation of technology in Tandem solar cells which will utilise the breakthrough Perovskite materials for bumping up efficiencies beyond even 30 percent.

He concluded by stating that currently there are no majority of manufacturers of solar modules and cells are now only in China and that it is becoming more and more important for Europe, and even for India to establish large scale and local manufacturing units. 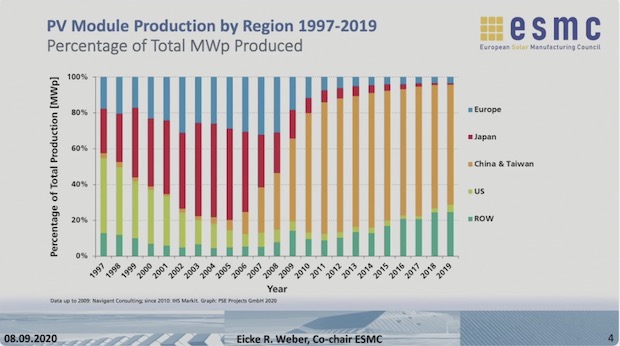 “A key question will be how quickly PV production will extend to Europe, the US, Japan and India,” said Weber. Since there presently aren’t many geopolitical problems between these countries, which is a good opportunity for them to work together.

“This decade will be decisive, in diversifying eco-friendly PV production worldwide, and in achieving the needed rapid progress in RE penetration, to realize our last chance to combat climate change!” he added.

Following up after Weber, Gunter Erfurt – CEO of Meyer Burger discussed how the European PV major is a part of the solar PV technology shift and the role it is playing in the transition.  Erfurt explained how Meyer Burger was the first company to industrialise the PERC modules which was conceptualised by scientists in laboratories around the world.

He further detailed how the firm has carried through this 2nd generation of solar PV technology now for more than 8 years (since 2012), and what the firm is working on next as PERC modules come closer to the end of their technology cycle.

Erfurt confirmed that to take on from PERC modules, Mayer Burger has been working on the next generation of module technology i.e. the Passive Cell Modules using HJT for now over 12 years. 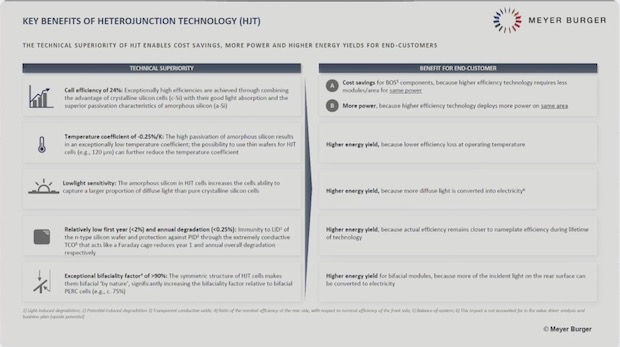 “HJT is next (passive cell) although it is now quite old. We have put this on our agenda on 2008, and are now proud to present this technology again at a point where we feel it is ready for mass production,” Erfurt said.

He said that with the right impetus and faster adoption, the technology can reach the 26 percent efficiency level in a few years.

Discussing a point on PV application in agricultural fields discussed by Weber, Erfurt claimed that the firms’ HJT modules are capable of being used as bifacial modules and will be capable “of capturing more than 90 percent irradiance from back sides of the panels,” much greater than the 70 percent that is currently possible.

Erfurt agrees that there is no real manufacturing outside China. And that it is becoming essential to establish more manufacturing facilities globally. He stated that Meyer Burger is looking to expand its manufacturing capacity to 5 GW/ per annum and is also willing to work in markets outside Europe.

Stephan Reber, CEO of NexWafe which is based out of Germany next discussed the new trend in solar wafer technology. He stated that we are currently at the tipping point and that the need of the hour is to move from carbon-intensive energy sources to efficient renewables.

He opines that solar PV will be able to take over from all carbon-intensive sources to meet the energy demands globally, but that will depend on how we implement and introduce more and more efficient technology. 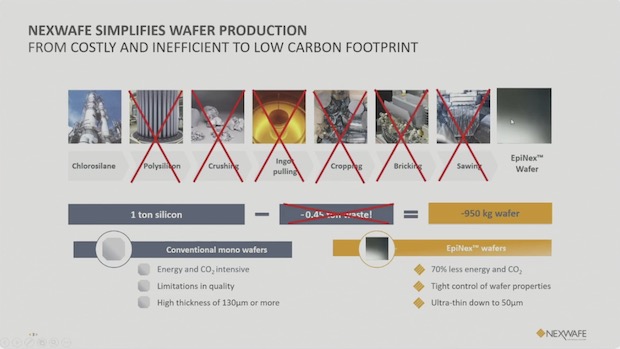 How EpiNex cuts down on wastage and energy required for production.

He then discussed the current process of production of mono wafers for solar PV modules and cells and explained how the process is riddled with wastage of energy and resources. And then presented the new EpiNex wafers that the firm is developing which more or less cuts out a bulk of the wastage and uses much less energy. (Explained in slides)

In the session that preceded this session, “Vision 2030 and Beyond” – Rohit Modi, Co-Chair FICCI Renewable Energy CEOs Council and, County Head and President India of SB Energy (Softbank Group) said that he believes that by 2030, solar will be the predominant source of energy and tariff will be at less than half a cent per kilowatt-hour.

A big part of meeting that level of tariffs will depend on the advancement of solar PV technology as discussed in the Disruptive Technology session. Disruptive Solar Technology WSTS