Ørsted has reached another milestone in its expanding offshore wind business with the installation of wind turbine 1,500 at the Borssele 1 & 2 project 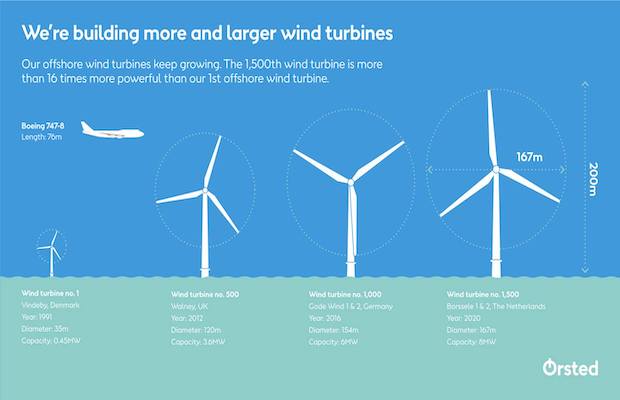 Global offshore wind major – Ørsted has announced that it has reached another milestone in its expanding offshore wind business with the installation of offshore wind turbine 1,500. The firm claims that it is set to more than double its offshore wind capacity in the coming five years using ever-larger turbines.

Before construction start at Borssele 1 & 2, the firm had already installed 6.8 GW offshore wind capacity globally, which annually supplies green electricity for the equivalent of 6.6 million households. It is currently constructing 3GW of offshore wind and aims to have installed a total of 15 GW by 2025 in Denmark, Germany, the Netherlands, Taiwan, UK and the US.

Anders Lindberg, Executive Vice President, Offshore EPC & QHSE, said offshore wind has matured at a rapid pace and can now be considered a cornerstone in the green transformation of many places in the world.

“The 1,500 offshore wind turbines installed by Ørsted will contribute significantly to a greener future, but there’s no doubt that the potential of offshore wind reaches far beyond that. Today, offshore wind power is not only a clean but also a cost-competitive alternative to power generated by the burning of fossil fuels.”