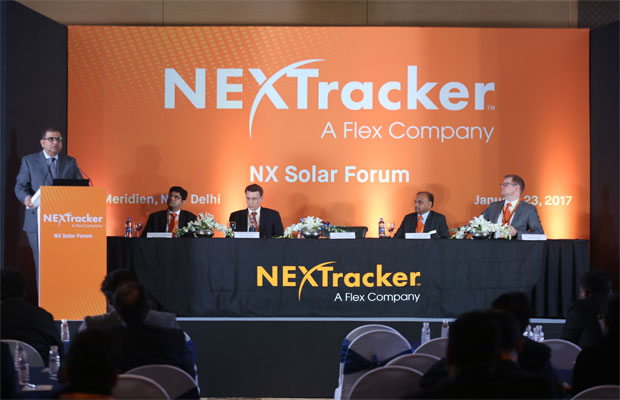 Pinning the potential of trackers in the Indian solar industry, NEXTracker today shared a comprehensive overview on their current and future plans for India.

The American single-axis major has also inked strategic partnership with CleanMax Solar to supply 30 MW of its advanced NX Horizon single-axis trackers to a project in Tamil Nadu.

The grid-connected project will deliver energy to a major IT consumer in Chennai, under a long-term contract with CleanMax Solar. The project was set up under the Group Captive Scheme, 100% of the electricity generated will be consumed in Tamil Nadu and is expected to be operational by the end of Q1 2017.

Citing on the development to the media and its partners, NEXTracker CEO, Dan Shugar said,  “We are proud to be partnering with India’s leader in the corporate solar market, CleanMax Solar,” “In the five years since its inception, CleanMax Solar has assembled an impressive portfolio of global industrial corporations to which it is providing clean energy generation. Our advanced solar tracker technology and experience in the India market will complement CleanMax Solar’s efforts to accelerate India’s private sector adoption of renewable power generation.”

“We are pleased to be working with NEXTracker on this project. The Company has a strong global track record of executing projects with superior design engineering and exceptional customer service,” stated CleanMax Solar Managing Director, Kuldeep Jain. “As the leading provider of solar power to corporates in India, we are always looking for the best technology to increase the output from our solar plants, and NEXTracker’s technology complements this approach perfectly.”

The company reckons the traditional non-tracker market, India’s solar tracker market to grow exponentially by 2021, amounting to 31% of ground mount projects, up from 7% in 2016.

The company also finds growing interest of many developers, such as CleanMax Solar, in solar tracking systems for private PPAs.

With close to 6 GW of solar tracker systems delivered worldwide, NEXTracker’s PV system technology and experience in the market, paired with CleanMax Solar’s tremendous success as developer, will help accelerate solar deployment in India – and around the world.

In coming time, the company also shared plans to commit towards Make in India and expand its portfolio by developing solar+storage solutions.