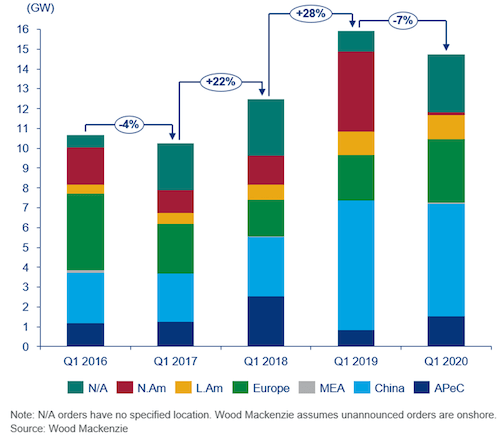 The first quarter (Q1) of 2020 saw nearly 14 GW of wind turbine capacity ordered globally. This is the second-highest first quarter on record and equates to an estimated USD 13.4 billion, according to a new analysis from Wood Mackenzie.

Wind turbine orders for the global onshore market made up 85 percent (12.6 GW) of capacity in Q1. Nine of the top 10 onshore wind turbine models sold during the first quarter of 2020 were introduced within the past two years, underscoring the rapid pace of technology evolution, evolving customer needs, and competitive product positioning.

“Positive momentum from order negotiations in 2019 largely eased the potential severity of the pandemic’s impact on order intake in Q1. Onshore demand in Europe, primarily in Scandinavia, the UK and Poland, tempered weak order intake in traditional onshore markets, such as the US, India and Australia,” said Luke Lewandowski, Wood Mackenzie Research Director.

The report adds that developers in China logged a feverish fifth consecutive quarter of more than 5 GW. “Chinese demand has started to wane this year due to the impending expiry of China’s onshore subsidy coupled with the impact of coronavirus during the first quarter of 2020,” added Lewandowski.

Further, orders for projects in Japan and Taiwan accounted for 33 percent of Q1 global offshore wind turbine order intake and 42 percent of overall offshore demand in the Asia Pacific, excluding China. MHI Vestas captured the entirety of this demand for offshore projects.

The deployment of higher-rated turbines continues to accelerate onshore, with the sector making up 45 percent of demand for models rated 5 to 6.99 MW during the first quarter of 2020.

“A similar trend is occurring in Asia’s offshore sector, with average turbine rating and rotor diameter increasing year-over-year for projects in China where policy and environmental conditions necessitate a slower pace of technology evolution. However, in Taiwan, developers have already jumped to 9.0-9.99 MW turbine models,” said Lewandowski.

Vestas, per usual, led all OEMs with 3.3 GW of announced wind turbine order intake in Q1, capturing 1.9 GW in the EMEARC region – the largest haul per region of any OEM.