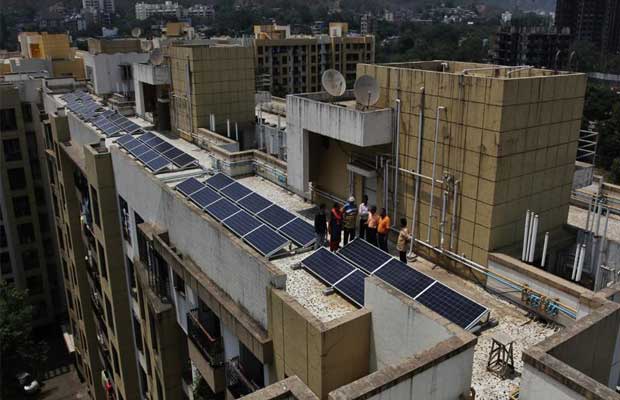 The Grace Co-operative Housing Society located at Mulund West in Mumbai has switched to solar power system and will be saving an approx. amount of Rs 5 lakh a Year apart from reducing almost 30 tonnes of CO2 emissions in one year.

Grace Co-operative Housing Society, Vasant Oscar, Mulund (West) has switched to solar and is expected to save Rs. 41000 monthly. The Housing Society has installed solar panels in the premises, which will help light up elevators and common areas of five buildings and its 160 apartments.

The residents of the society have also been segregating their organic waste and recycling it to manure to ensure the 100-odd trees they have within the complex stay intact.

S C Shrivastava, Secretary of the Grace Co-operative Housing Society told HT that other than saving on electricity bills, we are also trying to reduce our carbon footprint. India has signed the Paris climate accord and it’s our duty to fulfil the nation’s commitment. He also mentioned that the long term goal is to save future generations from ill effects of climate change.

KV Mujumdar, Resident and another Committee Member told the publication that we expect to recover the cost of installation over the next three years. We will also be recovering Rs 5 lakh through subsidy provided by Maharashtra State Electricity Board (MSEB) as per government rules.

Residents have also estimated reduction in carbon dioxide (CO2) emissions from the project. It is expected that the use of clean energy will help in reducing almost 30 tonnes of CO2 emissions in a year, which is equal to planting 1,250 trees.

The renewable energy source will not only benefit the residents of Grace CHS but also areas in the city where electricity supply is less. A net-metering system, which allows surplus power generated by solar will be exported back to the grid and any deficiency is imported from the grid. At the end of a financial year, the society will be charged by the power supplier only for the ‘net usage’. “Therefore, excess electricity will compensate areas facing power cuts in the city,” said Dhaval Gori from Aditya Green Energy that set up the plant.