The Seamless Soldering technology, when combined with innovative module design, has the potential to push the company’s high-efficiency PERC module power record to 500Wp. 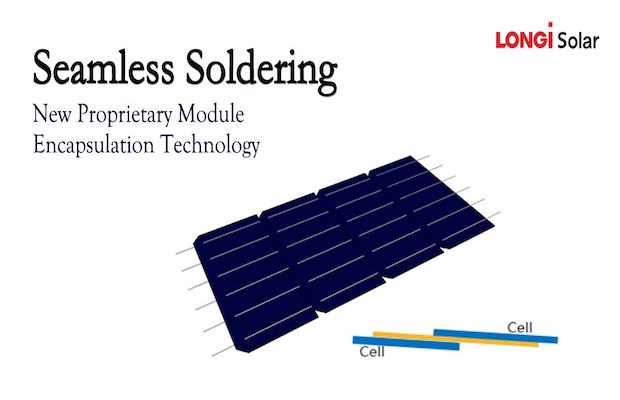 Chinese solar PV major, LONGi Solar has announced that the company has developed the technology of “Seamless Soldering”, which completely eliminates the gap between cells and increases the efficiency of PV modules.

The technology is planned for mass production in the second half of the year. According to a test conducted by the renowned certification agency TÜV SÜD, “Seamless Soldering” technology, when combined with innovative module design, has the potential to push the company’s high-efficiency PERC module power record to 500Wp.

The proprietary technology uses a solder ribbon to achieve “tiled” interconnection of the cell, completely eliminating the typical 2mm wide cell gap, thus increasing efficiency while reducing the BOM cost of the module. This technology is also compatible with existing module encapsulation processes and equipment. It has high mass production maturity and stability, and capacity is easily scalable. In addition, it has good technical compatibility that integrates with M6 monocrystalline silicon wafer, thin silicon wafer, soldering wire, and reflective ribbon.

“PV module technology continuous pursuits in the evolution of high efficiency and high power are the key factors in reducing the LCOE. LONGi has carried out intellectual property research on “Seamless Soldering” technology and has applied for a number of related patents. The launch of this technology marks a new step in the innovations of LONGi’s modules. LONGi will continue to invest in technology to promote a wider range of PV applications of PV in the world,” the company issued in its statement.

In May, the company released a new series of modules that it expects will set industry benchmarks – the new generation Hi-MO4 and Real Black high-efficiency modules.

Earlier in the month, the Chinese major also announced that the front side power of its 72-cell Bifacial half-cut module exceeded 450W, achieving one of the world’s highest power in this module type