According to a new report, India’s solar and wind generation capacity has been predicted to reach 135 gigawatts (GW) by the end of 2024 up from the 77 GW capacity it had reached at the end of 2019.

“Notwithstanding the various operational and financial challenges and growing risk aversion, we expect the record low solar tariff level to be breached in the next one to two years,” said renewable energy consultancy Bridge to India. in its report titled ‘India renewables outlook 2024’. 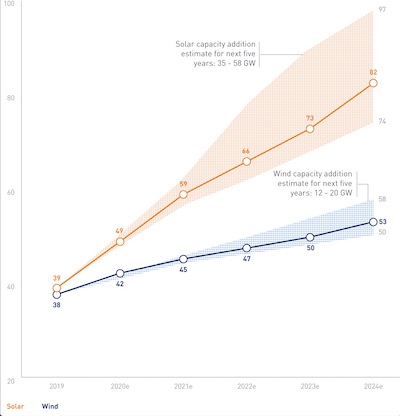 The report further revealed that there would be a move away from vanilla tenders to complex schemes including manufacturing-linked tenders, solar-wind-storage hybrid tenders and even completely technology agnostic tenders seeking firm 24×7 power. The higher complexity may bring down the number of active players and consolidate the industry further, it further added.

Regarding the results of the first mega storage tender, the report said that the growth potential is huge but, the take-off stage was still another two-three years away, as it remains to be seen if the discoms are willing to buy power at a cost of over Rs 6/kWh.

Highlighting the residential rooftop solar prospects, the report added that the sector is expected to pick up owing to clearer policy focus and improving availability of financing solutions. As safeguard duty on cell and module imports is set to expire in July 2020, the report added that mixed financing environment equity funding will remain easy as the sector attracts global investors.

Recently, the latest report by the Central Electricity Authority (CEA) tracking the monthly renewable energy generation in India for the month of December 2019 had revealed that electricity generated from renewable energy (RE) sources increased by 17.2 percent year over year (YoY) from the same month in 2018, and 23.9 percent over the previous month (Nov’19). Revealing that around 1508.51 MW of new renewable energy capacity was added during the month, the increase over the same month in the previous year was 85 percent which was 816.11 MW. Of the total new capacity added in the month, the majority was provided by solar installations which saw 1203.01 MW of new installations in the month.