India’s installed wind energy capacity has surpassed the 31 GW mark with nearly 37090 MW of capacity installed in the country as of October 31, 2019.

The information was provided by RK Singh, Union Minister of State for New & Renewable Energy, and Power, in a written reply to a question in the Rajya Sabha. The minister revealed that the cumulative installed capacity of wind power (as on 31.10.2019) in the country is 37,090.03 MW. Further adding that, so far, bids for 15,100 MW of wind power projects have been issued, out of which projects of 12,162.50 MW capacity have been awarded.

In his response, the minister also provided information about the installed wind capacity in the country and its statewide distribution. 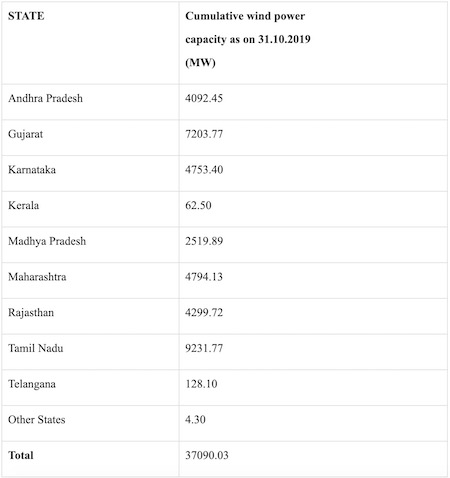 As seen from the table, Tamil Nadu with 9231.77 MW of installed wind capacity is well ahead of the rest and second positioned Gujarat which has 7203.77 MW of wind generation capacity. After the top two states, there are a host of third-tier states which have installed capacity in the range of 4000 MW and 5000 MW.

In a recent response to a question raised in the other house of the parliament, the New and Renewable Energy minister had revealed that as on October 31, 2019, the total grid-connected solar power generation capacity of the country now stood at 31,696 MW.

Additionally, the Minister had also pointed out that solar projects worth 17,998 MW capacity are at various stages of installations and that tenders for 36,278 MW capacity projects have been already issued. Additionally, the ministry also informed that new tenders of around 15,000 MW are planned in the remaining period of 2019-20 and 2020-21 and that with all these developments the country is on course for achieving its 100 GW solar target.