Renewable energy installations in India reached 86 GW at the end of 2019, and while wind is the major contributor, for now, solar is closing in fast.

Renewable energy installations in India reached 86 GW as of December 31, 2019. And while wind energy is the major contributor holding nearly 44 percent share in the total renewable mix, solar is closing in fast and is now at a 39 percent share. In the last one year, the share of solar rose by 5 percentage points to about 39 percent.

A new analysis by JMK Research has revealed that in CY2019, about 7.5 GW of new utility-scale solar capacity was added, which is about a 14 percent increase over the previous year. Another 1 GW was added in rooftop solar installations. Karnataka led the market with about 2 GW of new solar capacity additions followed by Rajasthan (1.7 GW), Tamil Nadu (1.5 GW), Gujarat (936 MW), Andhra Pradesh (917 MW) and Madhya Pradesh (651 MW). NLC, ReNew, Azure, and Acme were the leading project developers to add maximum solar capacity in 2019.

The analysis added that the total solar capacity added fell short of CY2019 projections. “We estimated about 8.5 GW of new solar capacity based on the project allotment schedule under various state and central tenders in 2017-18. A lot of projects which got delayed are now likely to get commissioned in the first half of 2020. These delays are primarily due to land acquisition issues, execution delays, delay by Discoms (secondary power off-taker) in submitting approvals to SERCs for tariff adoption, policy uncertainty because of regressive net metering guidelines and withdrawal of open access benefits, re-tendering, etc” it added. 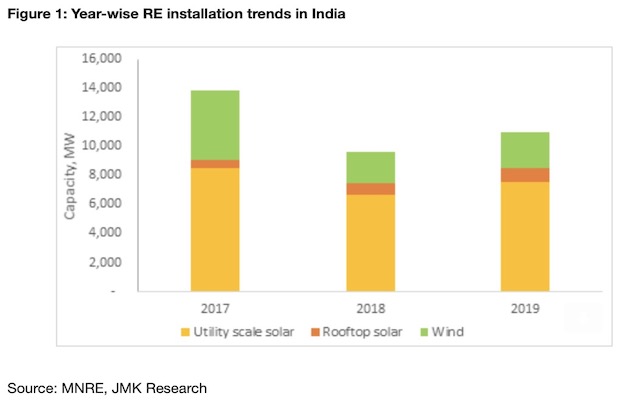 Further adding that on the wind side, in CY2019, about 2.4 GW of new wind capacity was added, which is a 10 percent increase over CY2018. Gujarat led the installations with the commissioning of 1.4 GW of new wind projects followed by Tamil Nadu (650 MW) and Maharashtra (212 MW). “Most of the wind projects allocated in 2018 and scheduled to commission in 2019 got delayed and are now likely to be commissioned in 2020. This delay in wind projects is primarily attributed to various land availability issues and lack of grid transmission availability. SembCorp, Mytrah, ReNew and Greenko were the leading players which added maximum wind capacity in 2019,” it added.