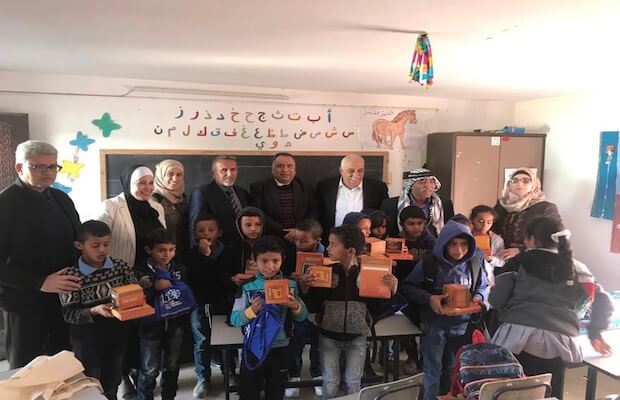 The solar-powered study lamps supplied by the Indian Institute of Technology (IIT) Bombay as part of the initiative on Mahatma Gandhi‘s 150th birth anniversary also aims at making the student beneficiaries the future propagators of renewable energy.

The Representative of India (ROI) in the Palestinian National Authority (PNA), Sunil Kumar, visited the Governorate of Jericho and Jordan Valley, where he was received by Governor Jehad Abu Al-Asal, Director of the Jericho Directorate of Education, and representatives of the local community.

As part of India’s outreach and cooperation programme in the local Palestinian community, Kumar visited the Ka’abneh Bedouin School with Palestinian dignitaries where he presented portable solar-powered lamps to the elementary school children. The school is located in a remote area of Palestine.

Addressing the students and the local community, he underlined India’s time-tested support to Palestine, especially highlighting New Delhi’s capacity-building efforts with an emphasis on the educational sector. The ROI also emphasised on the importance of renewable energy and solar power for the betterment of the quality of life and how it helps in preserving the environment.

Al-Asal expressed “sincere appreciation and gratitude to the Government and People of India for this kind gesture”, pointing out that it is even more special because it will benefit students of a local community that suffers from marginalisation and is deprived of basic services, including a stable source of power.