India has moved up two places to rank 76th on a global energy transition index, which ranked 115 economies on how well they are able to balance energy security and access with environmental sustainability and affordability. 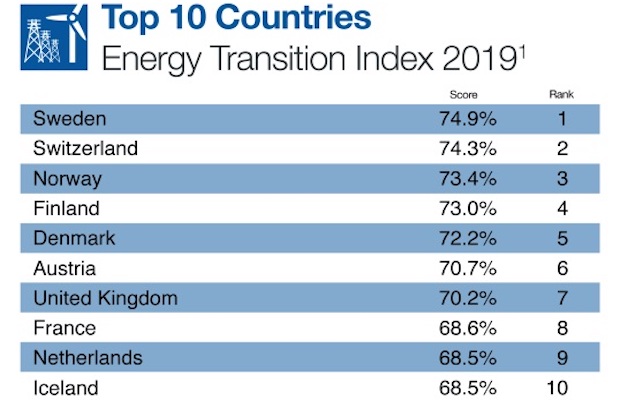 In the clean energy race, Sweden remains on the top on this annual list compiled by Geneva-based World Economic Forum (WEF) and is followed by Switzerland and Norway in the top three, as per its latest report released on 25 March.

The WEF said energy systems have globally become less affordable and less environmentally sustainable than they were five years ago, though access to energy has improved with less than 1 billion now living without access to electricity.

It said India is amongst the countries with high pollution levels and has a relatively high CO2 intensity in its energy system.

“Despite this, India has made significant strides to improve energy access in recent years, and currently scores well in the area of regulation and political commitment towards energy transition,” the WEF said.

It suggested there was a ground for optimism regarding India despite the current outdated energy system not being ready for the transition because an enabling environment is being built to support the future transition.

While India has scored low in terms of system performance (ranking 97 and 86, respectively), it ranks considerably higher when it comes to readiness (45 and 61, respectively). Overall, India has moved up two places from 78th last year.

China is ranked even lower than India at 82nd position, though it ranks very high at seventh place in the world for regulation and political commitment.

Despite its low ranking, India is the second best in the BRICS bloc of emerging economies, with Brazil being the best at 46th place globally. However, India is the only amongst the five economies to improve its rank since last year.

Among other major economies, the UK is ranked 7th, Singapore 13th, Germany 17th, Japan 18th and the US 27th. Within Asia, Malaysia is ranked highest at 31st, Sri Lanka is 60th, Bangladesh 90th and Nepal 93rd.

The WEF said its index considers both the current state of the countries’ energy system and their structural readiness to adapt to future energy needs.

Small economies have achieved higher scores on readiness. The biggest challenge facing attempts to future proof of global energy is the lack of readiness among the world’s largest emitters. The 10 countries that score the highest in terms of readiness account for a mere 2.6 percent of global annual emissions, the study found.

“The world’s transition to secure, affordable and sustainable energy has stagnated, with little or no progress achieved in the past five years,” it said.

It said continued use of coal for power generation in Asia, increasing commodity prices and slower-than-needed improvements in energy intensity have contributed to this year’s stagnation in performance.

The WEF said fossil fuels’ share of total primary energy supply at 81% has been constant over the past three decades. Also, the global CO2 emissions are expected to have increased by more than 2% in 2018, the highest since 2014.

Consumption of coal increased in 2018, after declining for three consecutive years. While the US has made progress in reducing the use of coal in power generation, it slipped in the rankings by four places reflecting concerns about the affordability of energy to households, and regulatory uncertainty on environmental sustainability.