Germany Met 65% of its Weekly Energy Demands From Renewables

Maintaining the trend of renewables regularly crossing the 50% mark, last week saw them supply 65% of power in Germany. 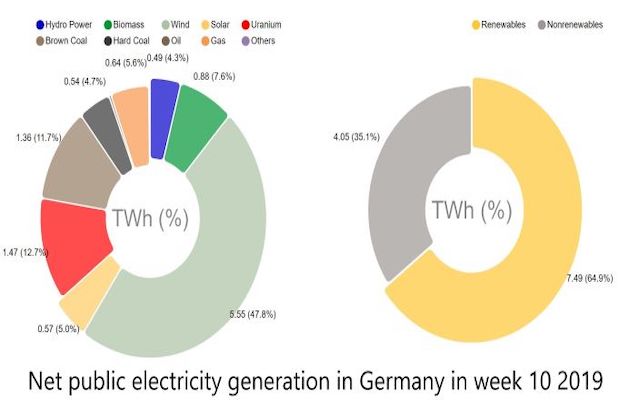 Renewable energy made up 64.8% share of electricity generation in Germany last week, according to solar research institute Fraunhofer ISE. The achievement was mainly due to strong production from wind facilities.

You must be wondering why this is a big deal. Well, Germany has a target of reaching 65 % renewable energy for its electricity network by 2040, but it is already capable of reaching such levels albeit for shorter periods of time proved that it is close to reaching the milestone.

For “week 10” of 2019, the week finishing on March 10 (Sunday), Germany sourced 64.8 percent of its electricity generation from renewables. The bulk came from wind (48.4 percent), with solar contributing 5.1 percent, biomass 7.6 percent and hydro 3.5 percent. For the entire week, renewable energy made up almost two-thirds of Germany’s net electricity production – the figure actually supplied to end users and excluding power plant losses and on-site self-consumption.

But that’s not all if you throw in nuclear, and the share of zero emissions electricity sources reached 77.7 percent for the whole week, in the biggest economy in Europe and one of the biggest in the world.

But now the challenge remains for Germany is replacing those solid red and brown lines at the bottom of the chart. Nuclear (in red) is due to be phased out by 2022, while all German parties have now agreed that brown coal (in brown) will be phased out by 2038.

Germany currently leads the world in the transition to renewables, although it faces stiff competition from the likes of Denmark, California, Hawaii, and the state of South Australia.

What makes Germany exceptional, is the sheer size of its grid, its dependence on an industrial economy, and its comparatively not-so-well wind and solar resources, which are vastly inferior to South Australia, for instance. Thus, the country offers vital lessons on grid stability and tolerance as renewables increase their total share.

This year has seen marked gains for renewable generation in Germany, with February seeing solar power contributing 20% more than it did it February 2018 and onshore (36%) and offshore wind (26%) also recording rises.

In the first ten weeks of the year, the share of renewables in net power generation totaled 43.3%, according to Fraunhofer ISE, up from a previous year’s 40.4% contribution. The data compilers said solar broke the 6% net generation benchmark earlier than ever this year, achieving that milestone in mid-February.