The Indian Institute of Management – Ahmedabad has issued a tender for setting up of 50 kWp rooftop solar PV system on two locations on the campus.

The scope of work for the selected bidders will include the design, supply, installation, and testing and commissioning of the two rooftop solar projects on a turnkey basis with five years (1+5) comprehensive maintenance contract.

The last date for bid submission is April 14, 2020, and the techno-commercial bids will be opened on April 15, 2020. A pre-bid meeting has been scheduled for March 24, 2020, to address the concerns raised by the prospective bidders. The date and time of opening of the financial bids will be intimated later to the cleared technical bidders.

All bidders must submit an Earnest Money Deposit of Rs 50 thousand along with their bids.

To be eligible for participating in the bidding process, the bidder should have been in the Solar PV Module business for a minimum period of five years. And should have a similar experience of implementation of rooftop solar projects.

Experience of having successfully completed similar works during last 5 years ending last day of the month before the one in which applications are invited should be either of the following:

Three similar completed works costing not less than the amount equal to Rs 7 lakh. OR

Two similar completed works costing not less than the amount equal to Rs 10 lakh. OR

One similar completed work costing not less than the amount equal to Rs 15 lakh.

Financially, the average annual financial turnover during the last 3 years, ending March 31 of the previous Assessment year (For FY 2016-17, 2017-18, 2018-19) shall be minimum Rs 20 lakh. And the bidder must be a profit-making organization in the last three consecutive assessment years.

As per the tender document and matching the university culture, the bidders will have to give a presentation for the overall assessment of the firm based on technology leadership, technical capabilities, work experience, quality, and team expertise before the IIM-A Core Committee. 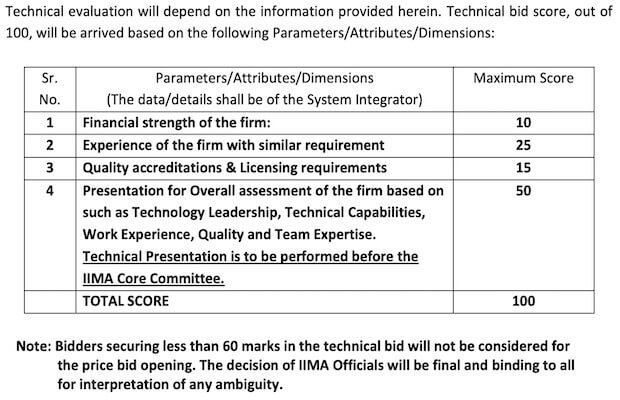