The global solar market is booming, and Chinese inverter exports reached a record level in the H1 2019, Growatt came after Huawei in the 2nd place with 86,153 inverter exports 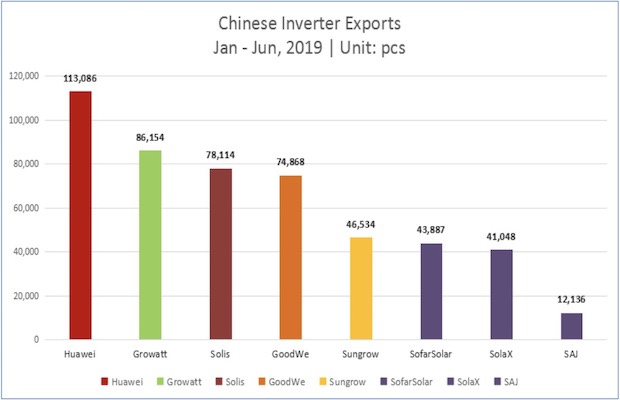 As shown in the chart, Huawei, Growatt, Solis and GoodWe are in the first tier inverter manufacturers that have exported over 70,000 inverters.

The renewable energy sector in the UK is observed with growth momentum, which benefits Solis and SolarX. Overall, the Chinese inverter manufacturers exported to key European solar markets, Netherlands, Italy, UK. And Belgium and Poland were viewed as the markets with good potential.

Apart from Europe, the Chinese manufacturers had their eyes on Australia. In Australia, Solis, Growatt, GoodWe and SolaX have taken a good pie of the market, all exporting over 10,000 inverters to the region. 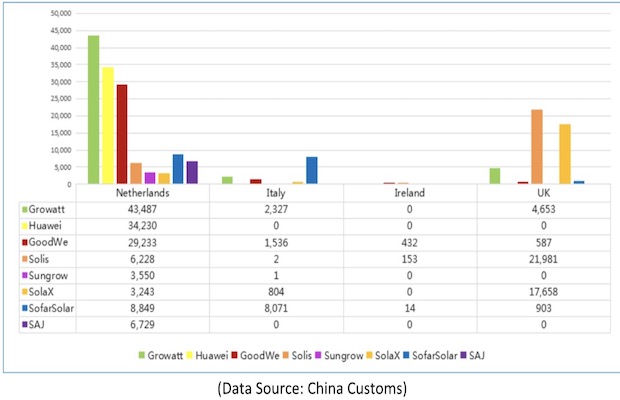 Australia started encouraging the development of solar energy back in 2001, the same time when China stepped in to promote the growth of the industry. In 2009, Australia put forward with the feed-in tariffs policy and by the end of 2018, the country had installed a total capacity of over 11 GW. Its residential sector is expected to reach an installed capacity of over 10 GW.

In the Americas, Argentina, Brazil and Mexico are the main destinations of Chinese inverter exports. The growing Mexican solar market has imported a good number of inverters from Growatt, GoodWe and Solis. Brazil has also seen strong competition of the Chinese inverter brands. The US tariff on Chinese modules has affected the Chinese exports, but the Chinese manufacturers have quickly adjusted to the impact and turned to Latin America for growth.