A research report published by Global Industry Analysts Inc., (GIA) makes the prediction that the global solar lighting market will reach $11.2 billion by 2026.

The global market for Solar Lighting Systems is estimated at US $ 5.5 Billion in the year 2020. Thus, the revised size of US$11.2 Billion by 2026 will entail growing at a CAGR of 13% over the analysis period. LED, one of the segments analyzed in the report, is projected to grow at a 15.2% CAGR to reach US$9.3 Billion by the end of the analysis period. After a thorough analysis of the business implications of the pandemic and its induced economic crisis, growth in the Other Light Sources segment is readjusted to a revised 8.4% CAGR for the next 7-year period. This segment currently accounts for a 36.6% share of the global Solar Lighting Systems market. 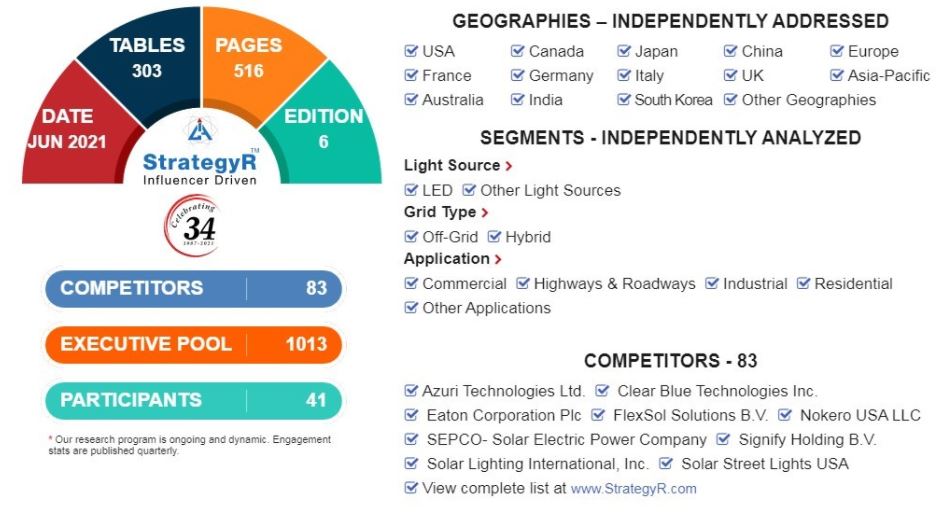 The U.S. Market is Estimated at $1.3 Billion in 2021, While China is Forecast to Reach $2.6 Billion by 2026The Solar Lighting Systems market in the U.S. is estimated at US$1.3 Billion in the year 2021. The country currently accounts for a 23.08% share in the global market. China, the world second largest economy, is forecast to reach an estimated market size of US$2.6 Billion in the year 2026 trailing a CAGR of 15.2% through the analysis period. Among the other noteworthy geographic markets are Japan and Canada, each forecast to grow at 9.9% and 10.4% respectively over the analysis period. Within Europe, Germany is forecast to grow at approximately 11.3% CAGR while Rest of European market (as defined in the study) will reach US$3.1 Billion by the close of the analysis period.

Growth in the market will be driven by the growing popularity of solar street lighting. Solar street lighting has been garnering a significant traction across cities owing to its potential to accelerate the transition towards a green, low-carbon future. The demand for these systems is further propelled by increasing demand for energy in both rural and urban areas. The technology is benefitting from declining cost of associated components like solar photovoltaic panels, making it an attractive alternative to conventional street lights. Solar street lights are capable of operating even on cloudy or rainy days.

The market is also bolstered by favorable government initiatives to reduce carbon emissions through the use of eco-friendly technology. The shift toward solar street lighting is expected to be further facilitated by numerous benefits of these systems over their counterpart traditional solutions. Solar street lighting is sustainable in nature and independent of power grid, which leads to low operating costs. Solar street lighting has lower risk of overheating and requires lower maintenance in comparison to traditional street lights. The lack of external wires further reduces the risk of accidents like electrocution and strangulation. Finally,  these systems can be easily installed in remote areas that are not served by conventional systems, making them a suitable and efficient option for addressing lighting issues.