FM Assures Manufacturer Associations Of BCD As Promised, From April 1, 2022

Finance minister Nirmala Sitharaman has assured delegation of domestic solar manufacturers that the Basic Customs Duty (BCD) that was announced on modules and cells almost 9 months back, will be implemented as scheduled, from April 1, 2022. This is basis a release shared by NIMMA, or the North India Module Manufacturers Association,  which was among the associations that met the minister, The others were Indian Solar Manufacturers Association (ISMA) and the All India Solar Industries Association (AISIA). The meeting took place in the Ministry of Finance, North Block, Delhi under the leadership of Ramcharan Bohra, MP – Jaipur City.

The delegation flagged their concerns regarding manufacturing units that are on the verge of closing owing to the current duty-free window on solar panels and solar cells from China and other countries. They also appealed to her to exempt the module and cell line plant and machinery from import duty.

Manish Gupta – President, NIMMA, and  Founder, Director at Insolation Energy said, “The meeting with the minister was promising as she recognised that the industry will require policy assistance to grow and achieve its full potential. Implementation of BCD will bring relief to the domestic manufacturing industry. We hope that additional measures to address supply-chain gaps will be considered. Further, this is the peak time for developers to purchase modules, and I request them to promote the government’s Atmanirbhar Bharat initiative and install Indian modules.”

Bharat Bhut – Cofounder & Director, Goldi Solar, a leading Indian Solar Manufacturer said, “We appreciate the government’s move to implement BCD on schedule. It is a boon for Indian module manufacturers who have been facing stiff price competition from imported modules. Goldi Solar has also increased its module manufacturing capacity to 2.5 GW and plans to expand to 5 GW to align with the Indian Government’s vision in becoming energy-independent with Made in India modules.” 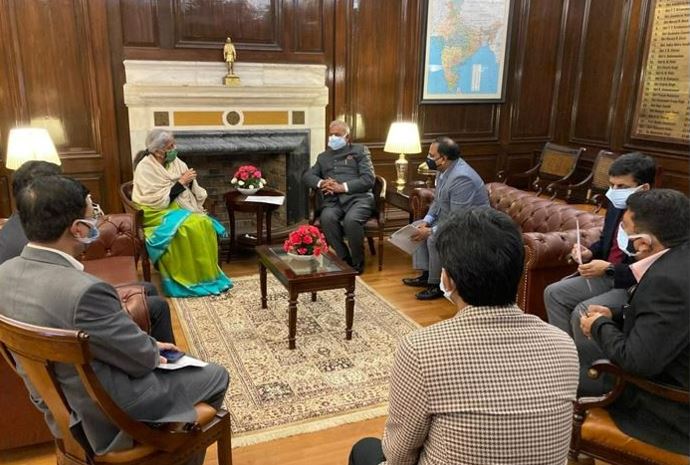 The issue of BCD and the current period of zero duties has been a sore point for domestic manufacturers, who claim to have invested massively on the basis of the visibility provided by the government on a long term, stable, tariff structure. As we have repeatedly mentioned, even by 2023, total domestic manufacturing capacity as approved by the government will probably be enough to service just over 50% of total domestic demand, after factoring in exports from India. In that situation, the government faces a tough task of balancing domestic manufacturing concerns, and the concerns of developers who have bid for large utility scale projects at aggressive prices, and face a new risk of higher module prices at the time of ordering, besides the regular risk of payment delays from discoms on existing projects.

Indications as of now have regularly pointed to a timely start of BCD, allied with a proviso that  allows qualifying projects before April 2021 to benefit from a grandfathering clause to allow them imports at a lower cost. Post April 2021, all tenders have clearly specified that domestic tariff rules as announced will apply. The government has also been using its ALMM list (approved list of module manufacturers), which contains zero foreign manufacturers currently, as a non-tariff alternative to create a market for domestic players, a method they seem to believe is not working as it should.

What is allowing the BCD initiative to move ahead is of course also the fact that multiple developers have expanded, or plan to get into manufacturing themselves, and a quite acknowledgement in government circles that a 10-15% extra cost of power is a price it should be willing to pay for a thriving  domestic manufacturing industry.