Substantiating the statement, the scientists told that large-scale wind and solar farms in the Sahara could provide enough energy to replace the fossil fuel energy used currently and in the foreseeable future. 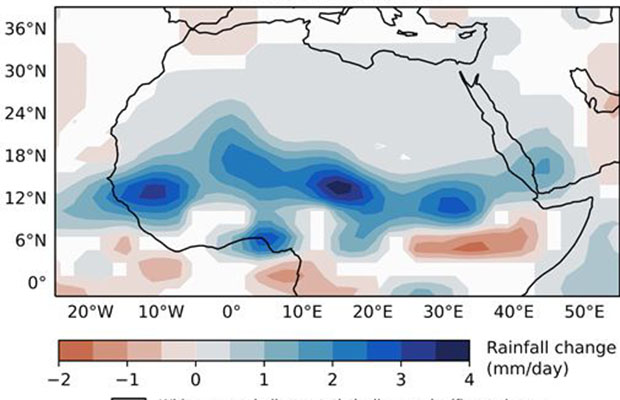 As a speculative breather to the dry and scanty Sahara Desert, Scientists of University of Maryland asserts that large scale wind and solar farms can bring to the desert its fair share of rains and therefore a relief to its lack of plantation.

The scientists reached to the conclusion after conducting novel climate and vegetation model experiments with the climatic conditions of the arid region.

Further, substantiating the statement, the scientists told that large-scale wind and solar farms in the Sahara could provide enough energy to replace the fossil fuel energy used currently and in the foreseeable future.

Moreover, the carbon footprint of the region was held responsible by the scientists for the lack of rainfalls.

The report also mentioned, “The primary effect of such renewable energy farms would be a substantial reduction of human-generated greenhouse gas emissions and the resulting mitigation of climate change.”

A study led by an international group of researchers, led by UMD scientists, explored such climate impacts by including bidirectional vegetation feedbacks between a global climate model and a land/vegetation model.

“Our model results show that large-scale solar and wind farms in the Sahara would more than double the precipitation in the Sahara, and the most substantial increase occurs in the Sahel, where the magnitude of rainfall increase is between ~200 and ~500 mm per year,” said Yan Li, a lead author of the paper who was a UMD postdoctoral researcher when the study began and is now at the University of Illinois at Urbana-Champaign. “As a result, vegetation covered fraction increases by about 20 percent.”

Also, “The Sahara has been expanding for some decades, and solar and wind farms might help stop the expansion of this arid region,” said Russ Dickerson, a leader on air quality research and a professor at UMD AOSC.”