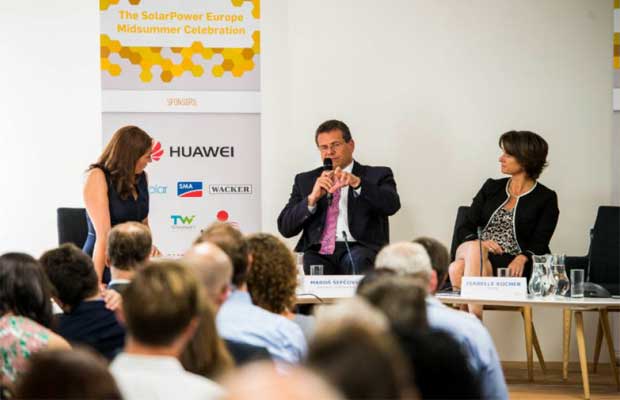 Solar power is essential to make the EUs plan of providing Europe with secure, affordable and climate-friendly energy, a reality. It is a technology that puts the consumer at the heart of the energy system and as such is crucial to the delivery of the Energy Union strategy.’

European energy leaders recently came together for the ‘SolarPower Dialogues’ to discuss the incredible achievements of solar, and how solar is driving the digitalisation of the European energy transition.

Isabelle Kocher, CEO of ENGIE, explained the rationale for her corporation’s strategic move to invest in solar. She said “The energy revolution is full of opportunities. It will allow us to modernize our entire energy system, and thus our economy, to tackle the climate change issue, to provide reliable and affordable energy to all including those in the most deprived regions of this world. Solar will play a prominent role in this new energy system. That’s why ENGIE fully embraces these fundamental changes and positions itself as a forerunner, a pioneer of the energy revolution.”

This statement was echoed by Maros Sefcovic, the Vice-President of the European Commission and in charge of the Energy Union who stated that ‘Solar power is essential to make the EUs plan of providing Europe with secure, affordable and climate-friendly energy, a reality. It is a technology that puts the consumer at the heart of the energy system and as such is crucial to the delivery of the Energy Union strategy.’

SolarPower Europe President Christian Westermeier pointed to solar’s record year by saying ‘Global solar deployment grew by 50% in 2016, reflecting the unprecedented speed with which solar is expanding. Utility-scale solar is now cheaper than new gas, coal and nuclear. This is just the beginning; the digitalisation of the energy sector will see solar become the most competitive energy source of the 21st century.’

Alison Finch, Chief Marketing Officer for Huawei Solar Europe, consolidated the view that solar has a lead role in the digital energy transition, stating, ‘Our society is becoming more connected, more collaborative and more intelligent than ever before. The digital transformation of solar is one good example of this transformation and will not be delivered by one company alone. Companies across the sector are already collaborating to construct the foundations that will support “smart” solar on a global scale. Digitalisation will dramatically change operations throughout the whole solar sector, facilitating pro-summer choice, peer-to-peer trading, cost effective operations and maintenance and continuing reductions to the overall levelized cost of electricity.’ He added ‘Focusing on the end consumer, households are getting smarter every day, with more and more appliances connected by the Internet of Things. By combining these, with smart PV hardware and intelligent management software, a complete smart home energy system can be created cost effectively for homeowners to enjoy a better life. ‘

The SolarPower Dialogues are part of the annual midsummer celebration of solar held by SolarPower Europe.