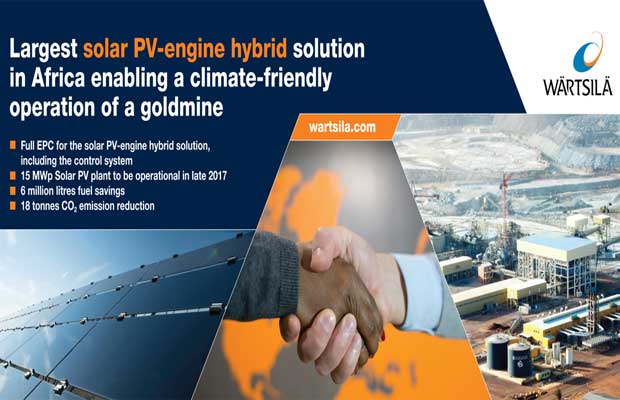 Wärtsilä’s scope covers the engineering, procurement & construction (EPC) for the solar PV power plant at a gold mine in Burkina Faso, including the control system for the hybrid plant.

Essakane Solar SAS, 90% owned by global independent power producer EREN Renewable Energy (EREN) and 10% by its development partner African Energy Management Platform (AEMP), will operate the solar PV power plant and sell the energy to IAMGOLD’s Essakane Mine. The off-grid gold mine, located 330 kilometers northeast of the Burkina Faso’s capital city, Ouagadougou, produces approximately 400,000 ounces of gold per year. Reliable and sustainable around-the-clock energy is a requisite for an off-grid mine location like this.

The ability to control and optimize the usage of engines and solar power will enable the mine to decrease its fuel consumption by approximately 6 million litres per year and to reduce its annual CO2 emissions by 18,500 tons. In addition, the project will create jobs for the region during the operation said the company in a statement.

“EREN chose Wärtsilä for its meritorious track record in EPC projects in Africa and their commitment to design, deliver and support a reliable hybrid solution like this,” added Christophe Fleurence.

With this project Wärtsilä will have over 6800 MW of installed capacity on the African continent. Globally, Wärtsilä’s installed base is over 63 GW in 176 countries.