The DGTR suggested that the purpose of anti-dumping duties is to eliminate injury caused to the domestic industry by the unfair trade practices of dumping and to re-establish open and fair competition in the Indian market. 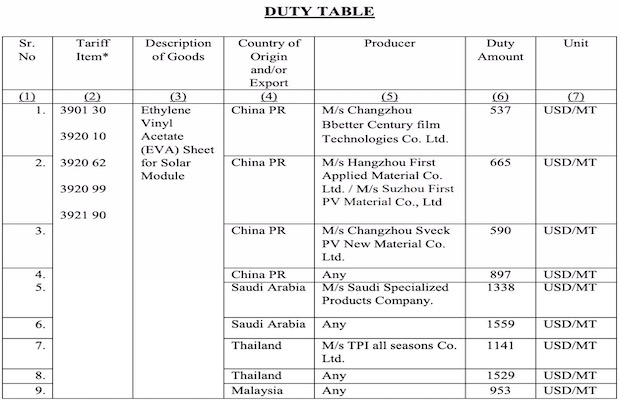 The Directorate General of Trade Remedies (DGTR) in its final findings notification on the matter of anti-dumping investigation concerning imports of “Ethylene Vinyl Acetate (EVA) sheets for solar modules” has recommended the imposition of anti-dumping duty on the imports from China PR, Malaysia, Saudi Arabia, and Thailand for a period of 5 years.

The petition was filed by Renewsys India Pvt.Ltd., with the claim that there is no known difference between the EVA sheets imported from the above-mentioned countries and that produced by the petitioner, and the consumers can use the two interchangeably.

EVA sheets are used for encapsulation of solar PV cells performing adhesion and cushioning functions. This is one of the essential components which keeps the glass, cell, and back sheet integrated and support the module mechanically during its service life time. And, Renewsys “the petitioner,” said that it produces EVA sheets in all types of widths and thicknesses as required by the module manufacturers.

In April 2018, the Directorate had initiated an investigation on the import of EVA sheets for solar modules imported from China PR, Malaysia, Saudi Arabia, South Korea, and Thailand. But later, imports from South Korea were excluded from the investigation as the DGTR found that these imports are mostly EVA resins, the raw material for EVA sheets.

After the petition was filed, the investigation focused on the EVA sheets exported to India between October 1, 2016, and September 30, 2017.

Parties opposed to the anti-dumping duty argued that the domestic industry is not utilising their capacities efficiently. With only 25 percent capacity utilisation and producing only 4,151 MT against the total demand of 10,396 MT. Such a huge gap in demand and supply has caused an increase in the imports of EVA sheets from these countries.

DGTR suggested that the purpose of anti-dumping duties is to eliminate injury caused to the domestic industry by the unfair trade practices of dumping and to re-establish open and fair competition in the Indian market. Imposition of anti-dumping measures would not restrict imports from any country and would not affect the availability of the products to the consumers.