Cyclone Fani might have sent shudders down plans for large sized solar parks in the region, but ironically, the demand for distributed solar products has gone up. People are now grappling with water shortage, lack of electricity, poor mobile connectivity and cash crunch. 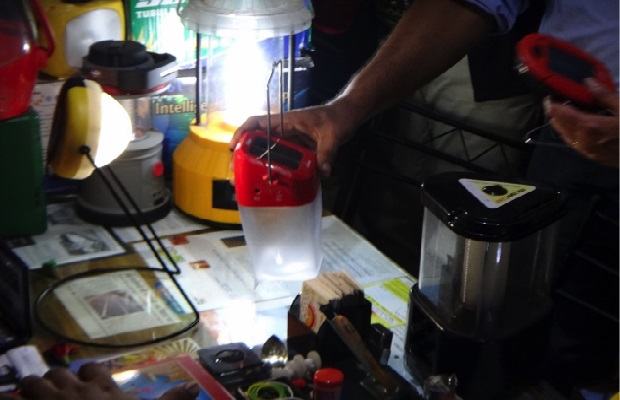 With no end to electricity woes on sight, residents of the capital city, grappling with acute power shortage after cyclone Fani, are now looking for other unconventional modes of power.

In order to meet day-to-day requirements especially during the night hours, people have begun to use battery-charged lights and solar devices following which electrical shops are witnessing a heavy rush of customers.

Keeping the huge demand in view, traders and shopkeepers have opened up stalls at several places and are selling China-made battery-operated lights, solar lights and fans.

“People of Bhubaneswar had never expected to face such times of distress. Since 11 KV power lines have been snapped we believe that electricity restoration may not be possible for few more days, so we are forced to depend on battery and solar lights for safety during night time,” said a resident to local media.

“Demand of lights and their rates have increased so much that we are not able to provide enough materials,” said a shopkeeper.

With power in Puri especially slated to return only after a month, most of the demand is for solar-powered lights and fans, followed by solar rechargeable batteries to recharge mobile phones to aid communication between families affected by the cyclone. However, people are complaining about the price. Due to the heavy demand, most of the products sold in shops are witnessing a rise in price on a daily basis.

India which has finished the electrification of over six lakh villages in the country last year, including last 19,000 villages by the government, still has 40 million rural households in India do not have affordable electricity and off-grid solar provided the much-needed answer, according to World Bank‘s private lending arm, International Finance Corporation (IFC). According to Global off-grid Lighting Association (GOGLA), India has now become the single largest market for distributed standalone solar products and represented over 33% of global volume share in the first half of 2018.

Cyclone Fani proves that emergency services and deployment of solar devices can help manage the damage natural storms often cause.