Could Renewables Displace Conventional Fuels in Asia in 2020s?

In a new report, Wood Mackenzie highlights trends that will shape Asia Pacific’s power and renewables markets this decade, and what it holds over the next 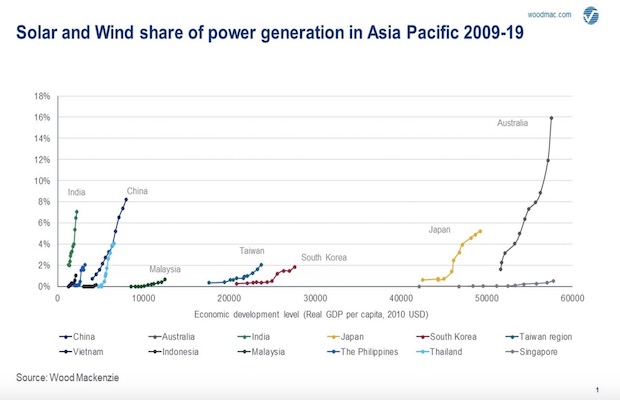 Wood Mackenzie research director Alex Whitworth said that “despite the massive growth of renewables in the past decade, Asia Pacific markets have relied mainly on conventional power technologies to meet new power demand, with over 80 percent of new power output coming from coal, gas, nuclear and hydro.

“As we look to the 2020s, a key question will be whether renewable power can further displace conventional fuels to supply incremental demand in growing Asian markets.”

The report predicts that China will play a key role, having dominated the supply chain as well as the installation of solar photovoltaics, with over 200 gigawatts (GW) installed in the last decade. Both government support and innovative strategies, such as setting up one-stop ‘industrial ecosystems’ for solar, have played a role.

Further adding that the domestic market looks set to slow down in the 2020s, as they expect Chinese manufacturers to put more emphasis on overseas market strategy and on developing products and partnerships for overseas markets. “The question is how fast will we see Chinese companies move out of their domestic market,” Whitworth added.

Counterintuitively, geopolitical tensions may have a positive impact on power markets in Asia in the 2020s. The US-China trade war is creating investment opportunities in the rest of Asia, particularly Southeast Asia. Both Chinese and US solar module manufacturers have moved into the region in recent years due to tariffs levied on Chinese products.

The falling cost of renewables in recent years has been a double-edged sword in the short term. It not only greatly increased deployment of wind and solar, but also forced governments to cut subsidies. This will continue in the 2020s, with the impact of market forces a key uncertainty.

Many governments in the Asia Pacific prioritise lowering power prices over other goals and still rely heavily on fossil fuels to support economic growth. In 2019, new gas supply contributed to spot LNG prices in Asia falling by over 30 percent. Coal prices also fell dramatically. These trends have a major impact on the competitiveness of renewable power, and indirectly on policy decisions made by regional governments.

Whitworth concluded that “these uncertainties should contribute to a levelling off of new wind and solar capacity additions in Asia in the next few years, and some fairly exciting debate about how the market will develop beyond that. One thing is sure: now that renewables investments have become mainstream, expect that they will experience increased exposure to government policy shocks and price shocks in the 2020s.”